The Pacific Steam Whaling Co. constructed this building in the early 1890s, presumably for storage purposes. The Mounted Police later used the building to prepare dog feed. Minor repairs were carried out to conserve this building and to allow it to accommodate the Park maintenance workshop. No major changes were required for the building’s new use.

This building was likely constructed by the Pacific Steam Whaling Company for storage purposes, see also the PSWC community house and bonehouse. There is presently very little information about this building, but from its appearance in historic photos it is estimated to have been constructed around 1893 [1]. At one point, this building had an addition that extended from its west end. The addition was the same size as the current building, although slightly shorter [1,2].

Its original construction and use is unknown. However, current information indicates that it was built by the Pacific Steam Whaling Company and was likely used for industrial purposes [1,2]. At a later point, this building was acquired by the Royal Canadian Mounted Police (for history of the RCMP on Herschel Island visit) and they used it to prepare dog feed.

The blubber house is a small frame structure, approximately 8.5 m by 4.9m. The floor is supported independently of the rest of the building [1]. The walls are sheathed with vertical boards and shingled on the exterior. The gable roof is framed using with rafters and collar ties and is also sheathed and shingled on the exterior. In the interior of the building the framing of both the walls and roof are exposed. The blubber house has one entrance, which is located in the south wall. Windows and former windows are located in the south, east and north walls [1].

Currently this building is used as storage by the park rangers.

This gallery contains images of the interior and exterior of the Blubber House from 2018 and 2019. 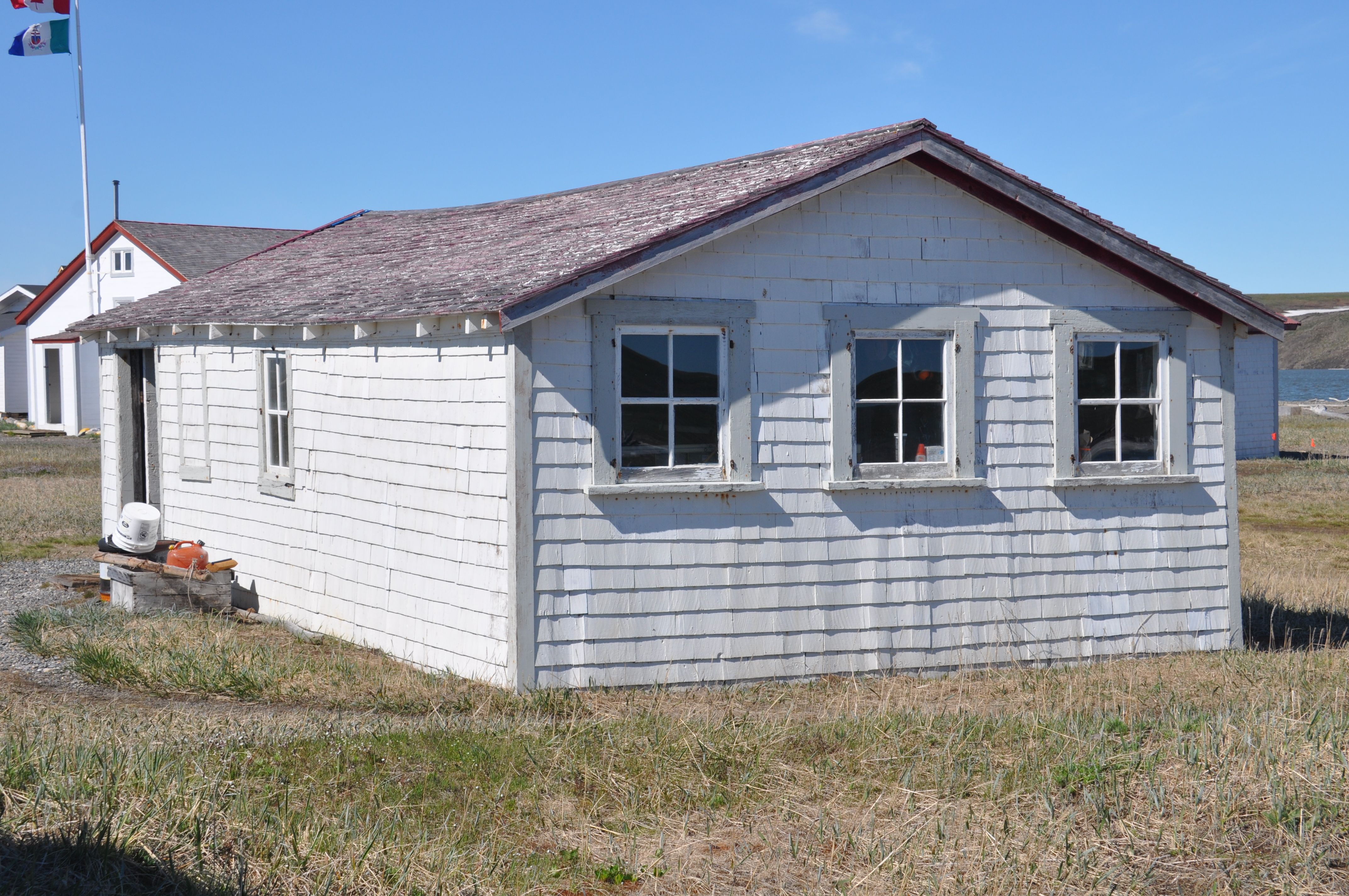 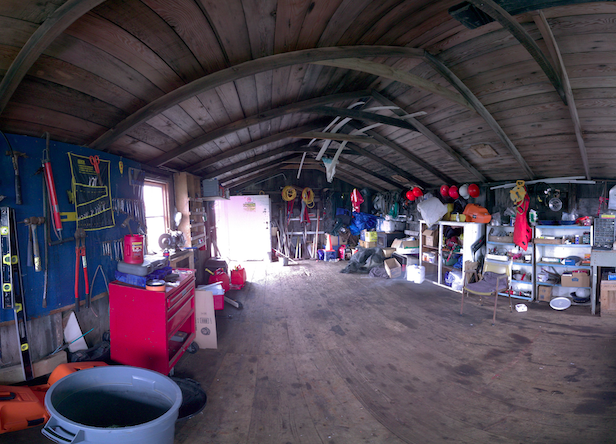 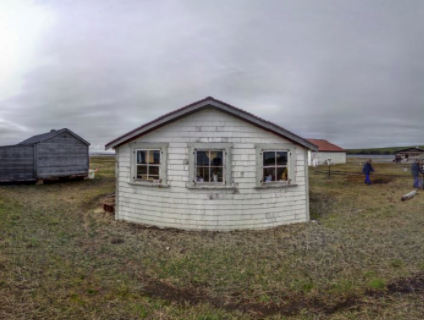 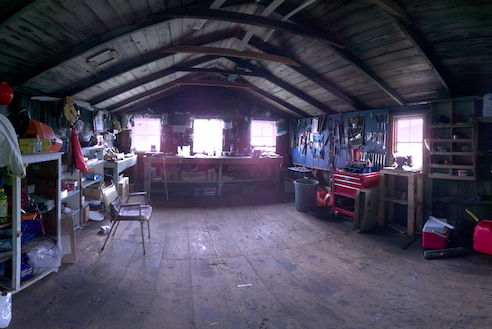 Click on the 3D model of Pauline Cove. Marker (11) shows the location of the Blubber House. 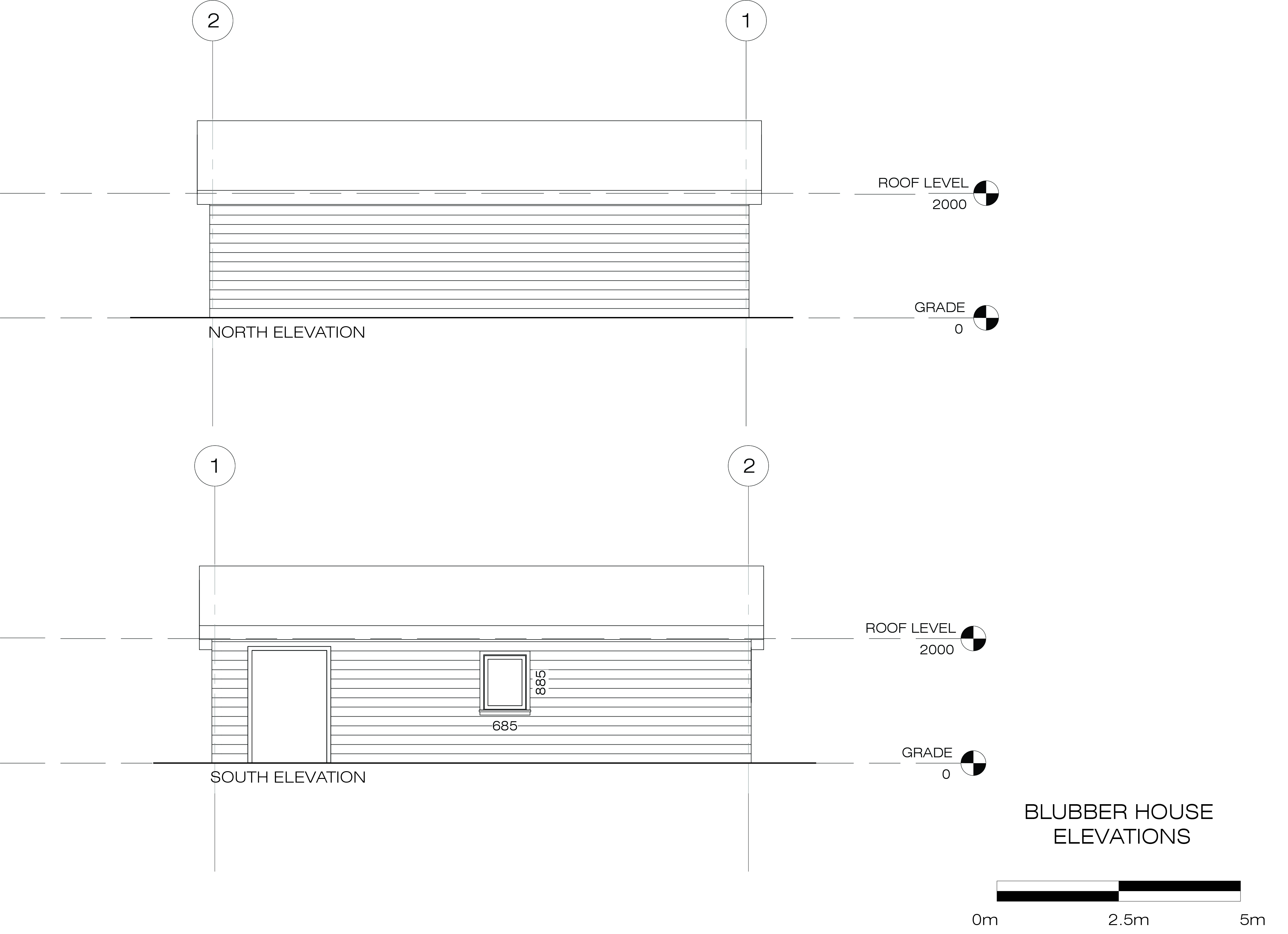 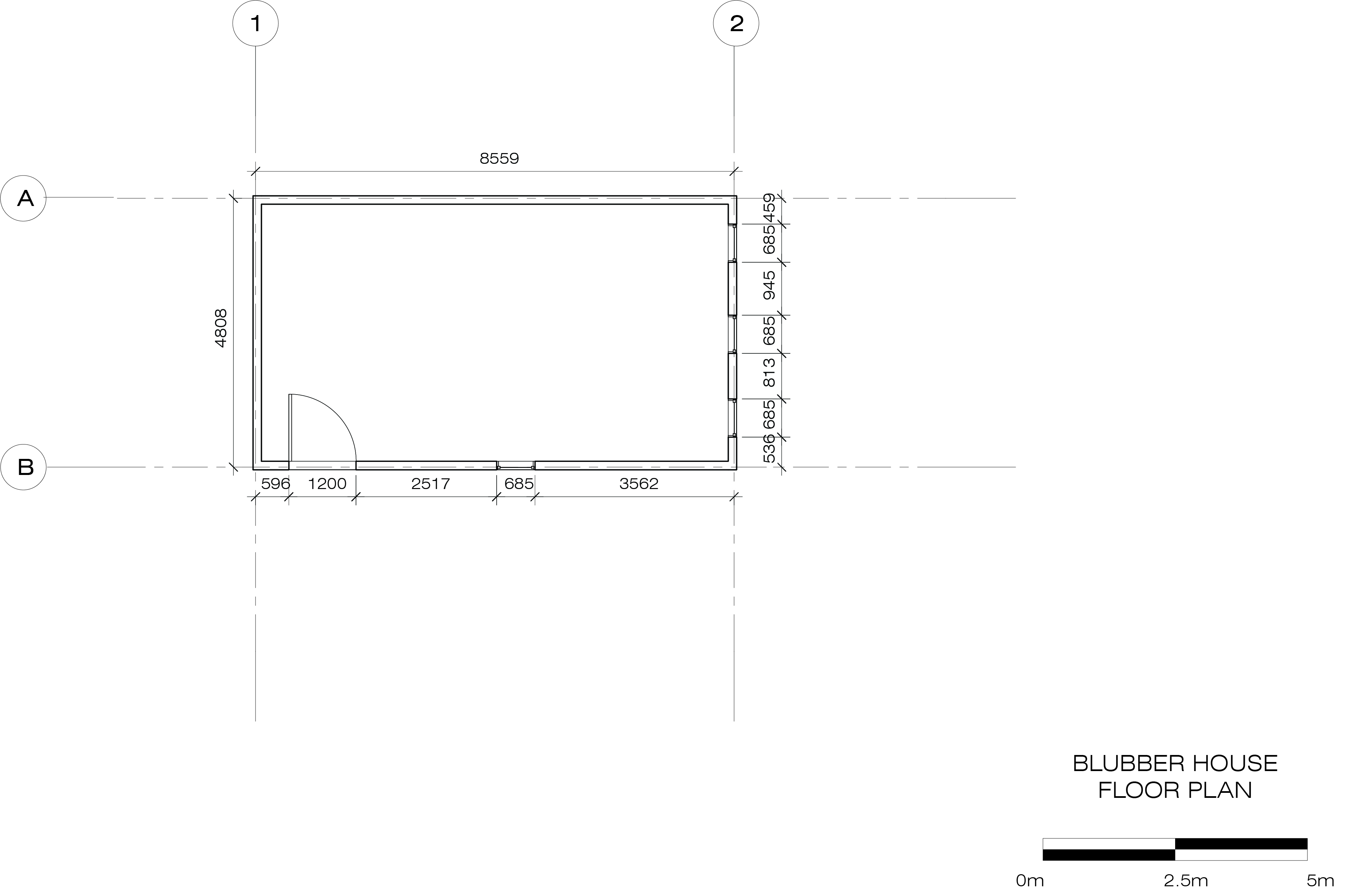 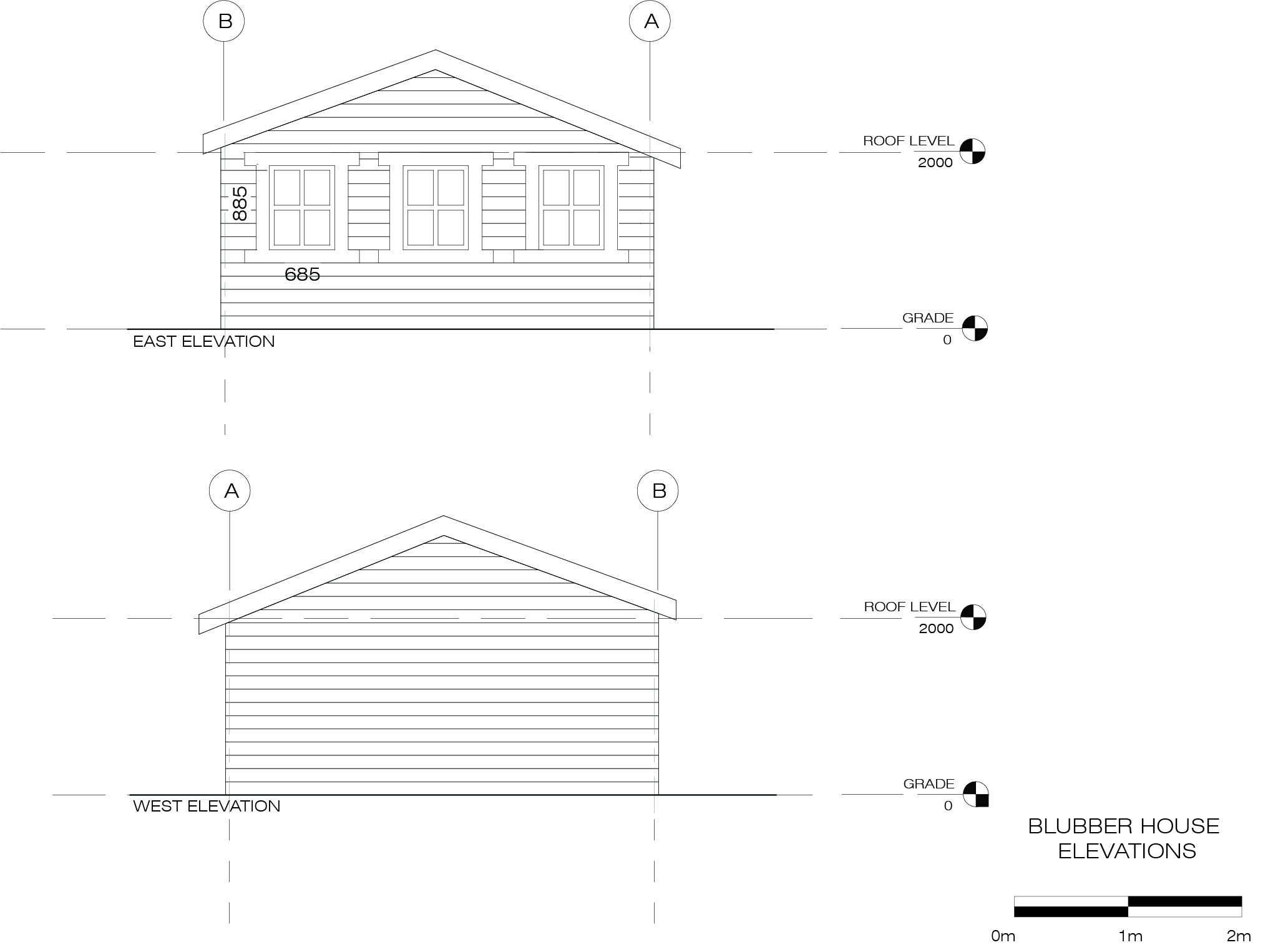 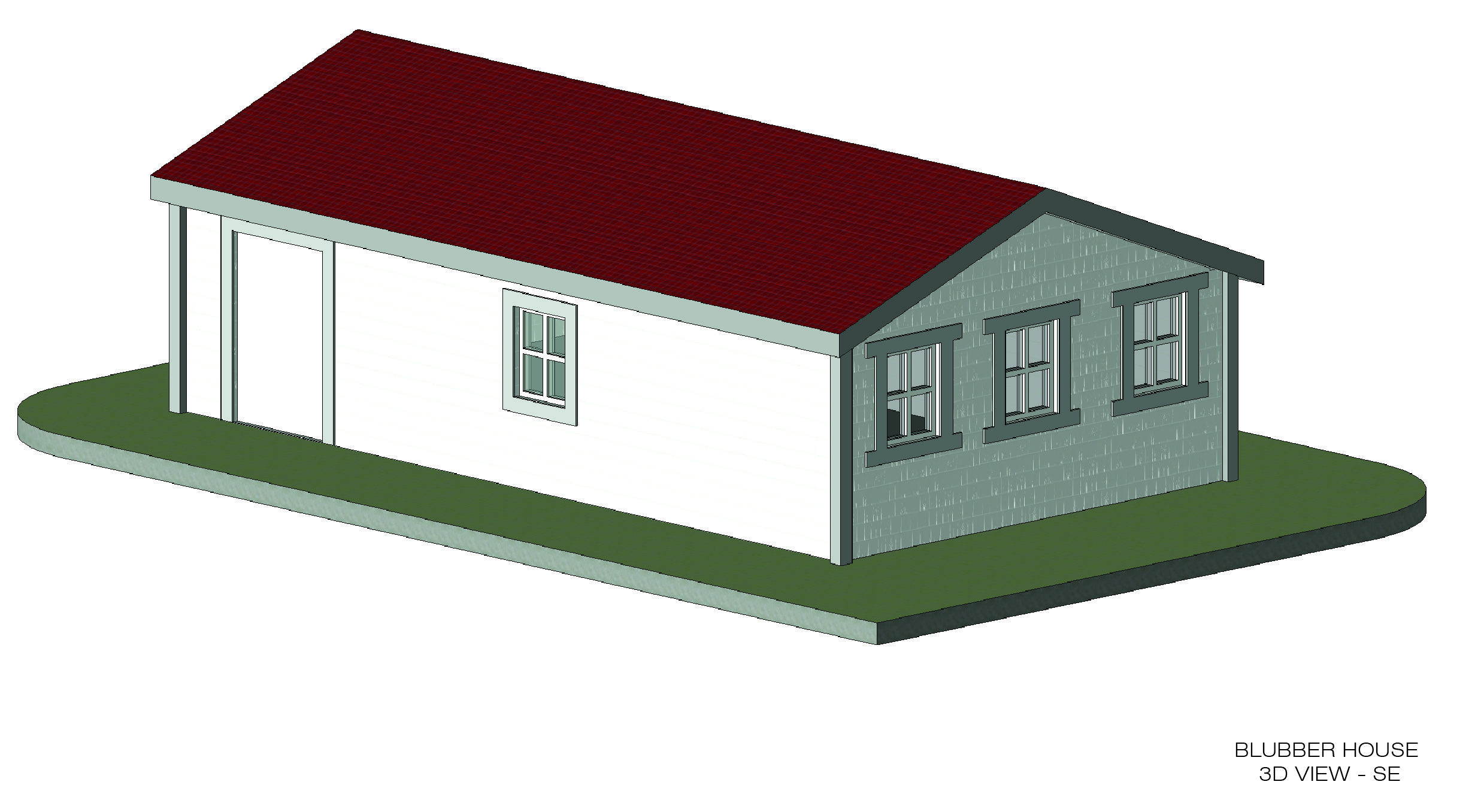 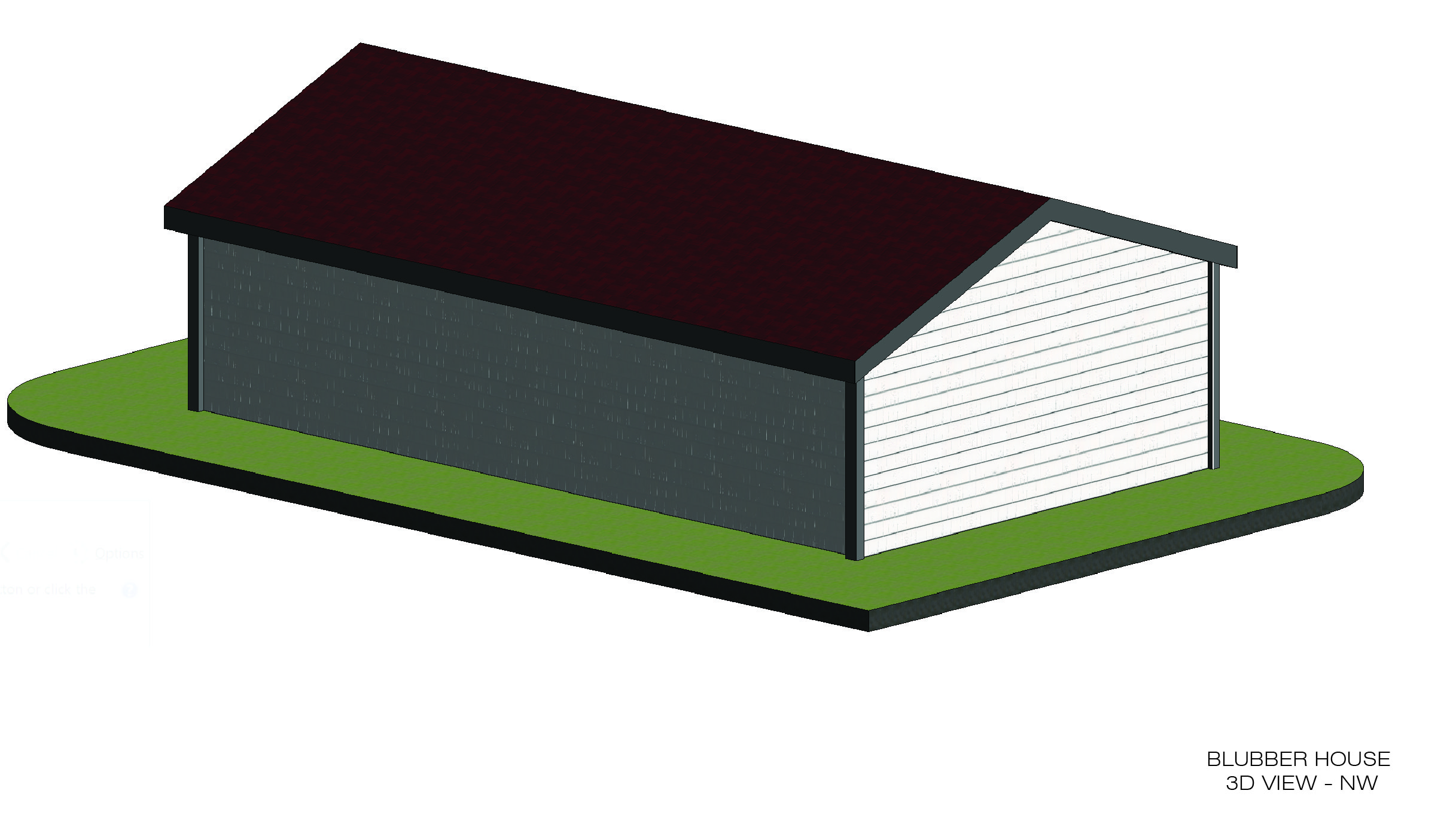 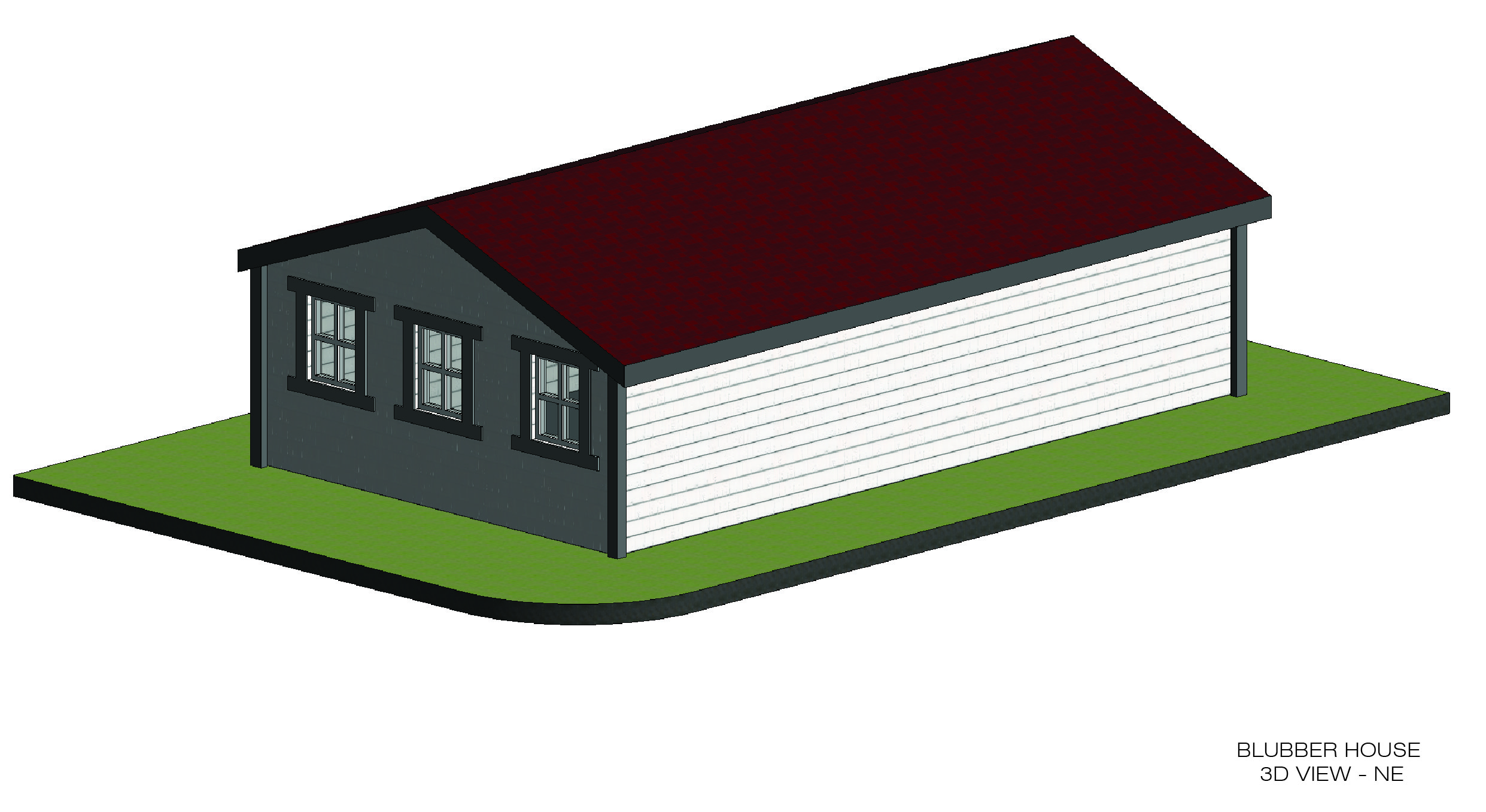 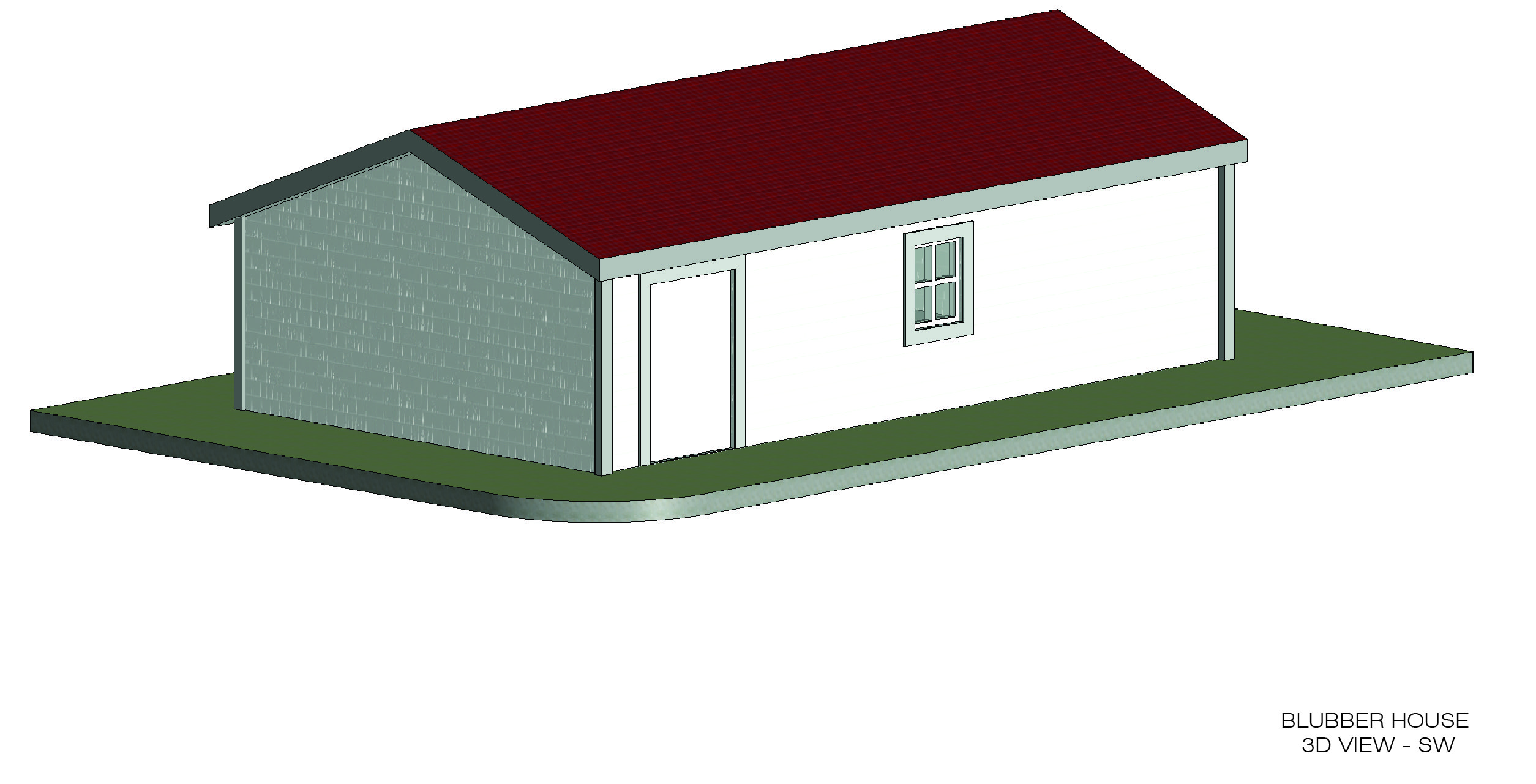 The Pacific Steam Whaling Co. blubber house was first digitally captured in July, 2018. The exterior was documented with a Z+F 5010X scanner (red dots) and mounted paper targets, using 11 scanning locations situated roughly in a circle around the building. In anticipation of later capturing the interior of the building, a scanning location was positioned in front of an open door to capture portions of the interior.

In 2019 the interior of the building was scanned with a Leica BLK 360 scanner (blue dots) using an additional five scanning locations. No targets were used to capture the interior of the building, and scans were registered together using cloud-to-cloud registration in AutoDesk ReCap Mobile and Pro. The interior and exterior scans were registered together in AutoDesk ReCap Pro using cloud-to-cloud registration based on the common data from the doorway scanning position. 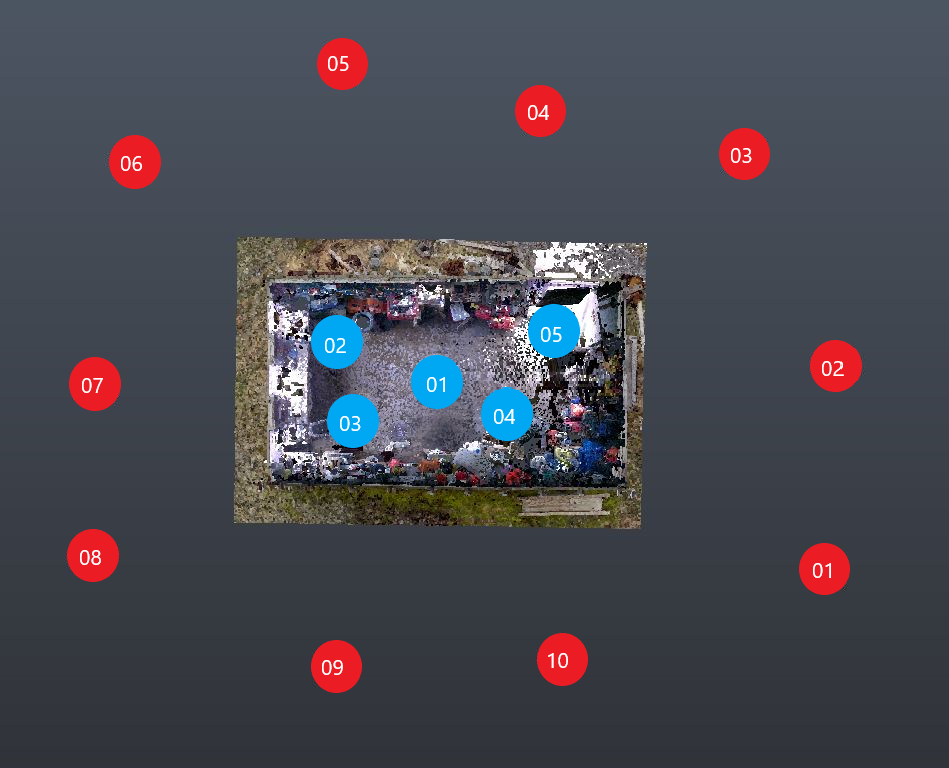 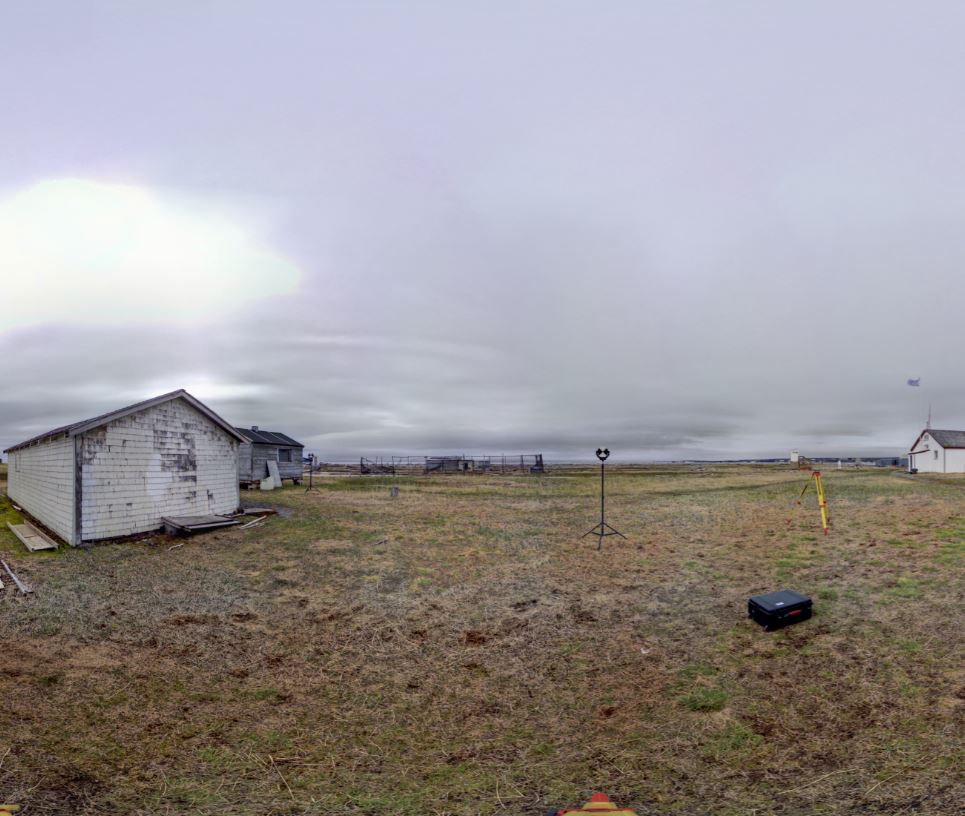 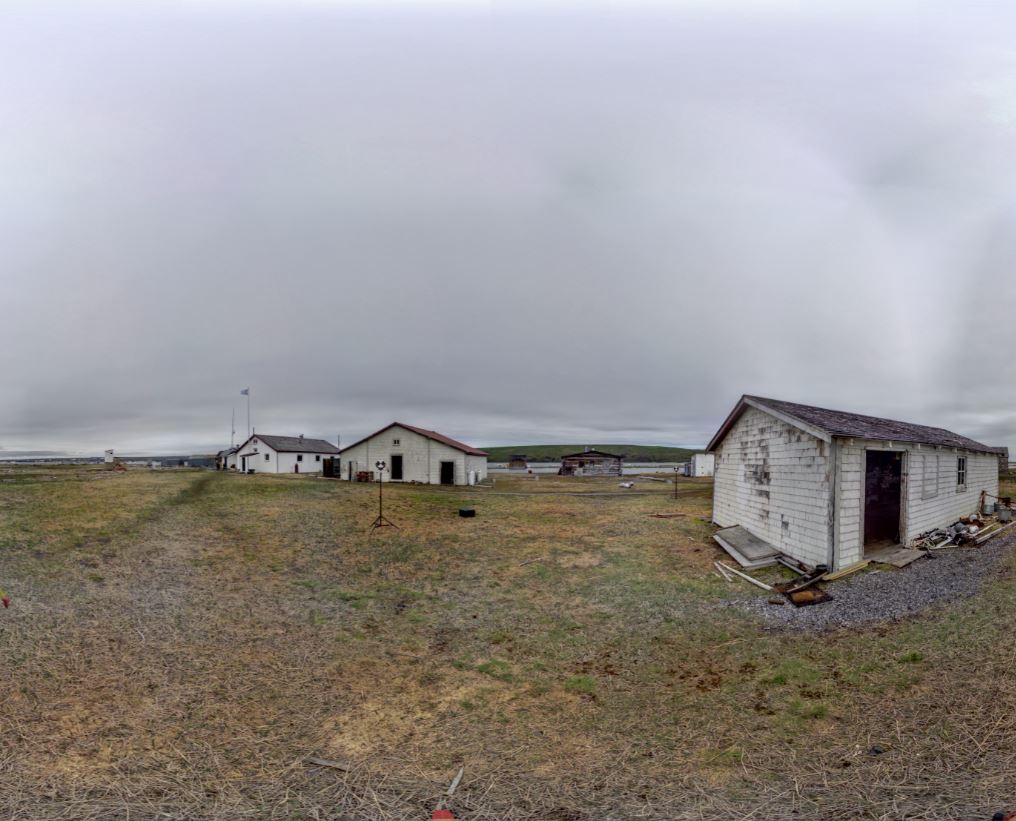 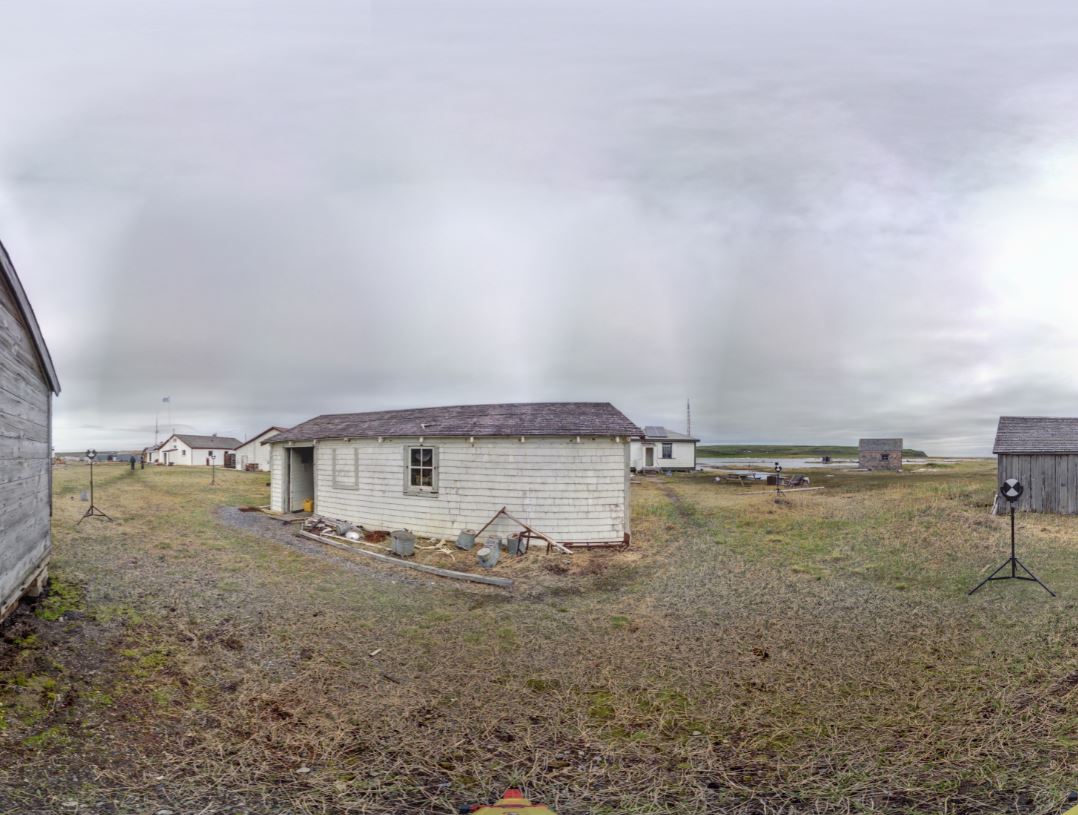 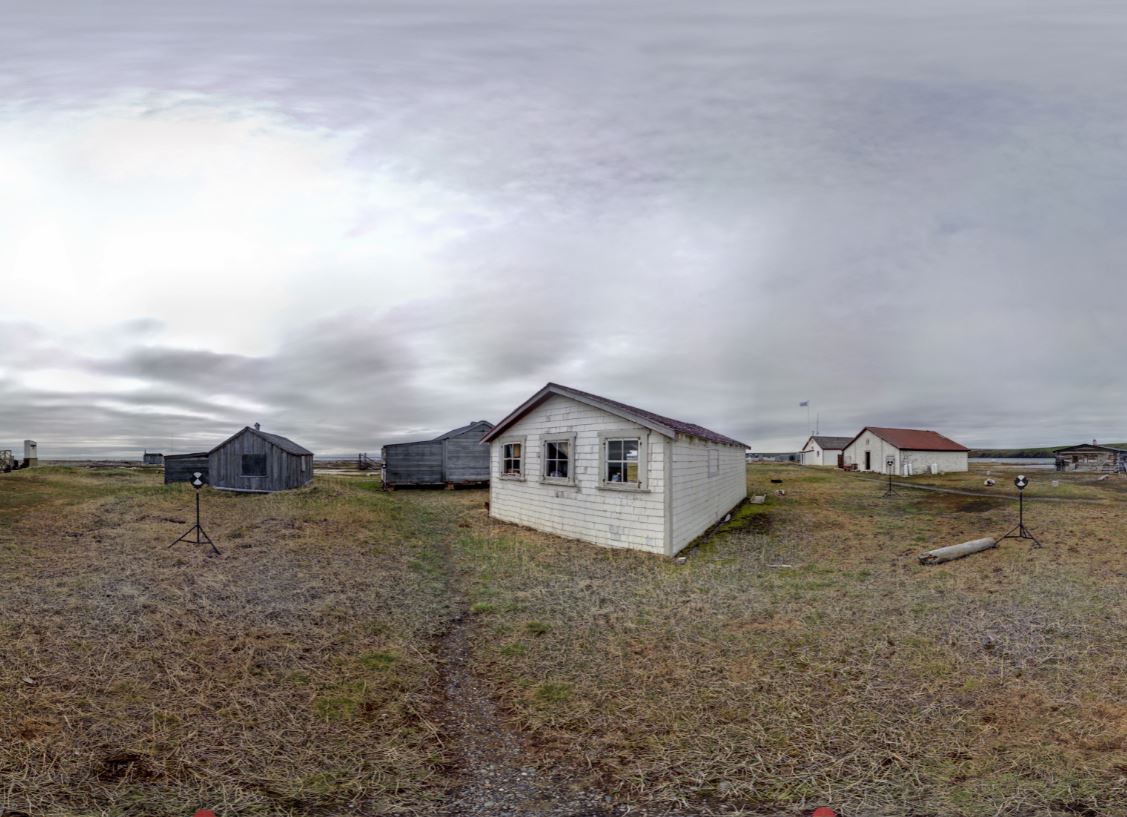 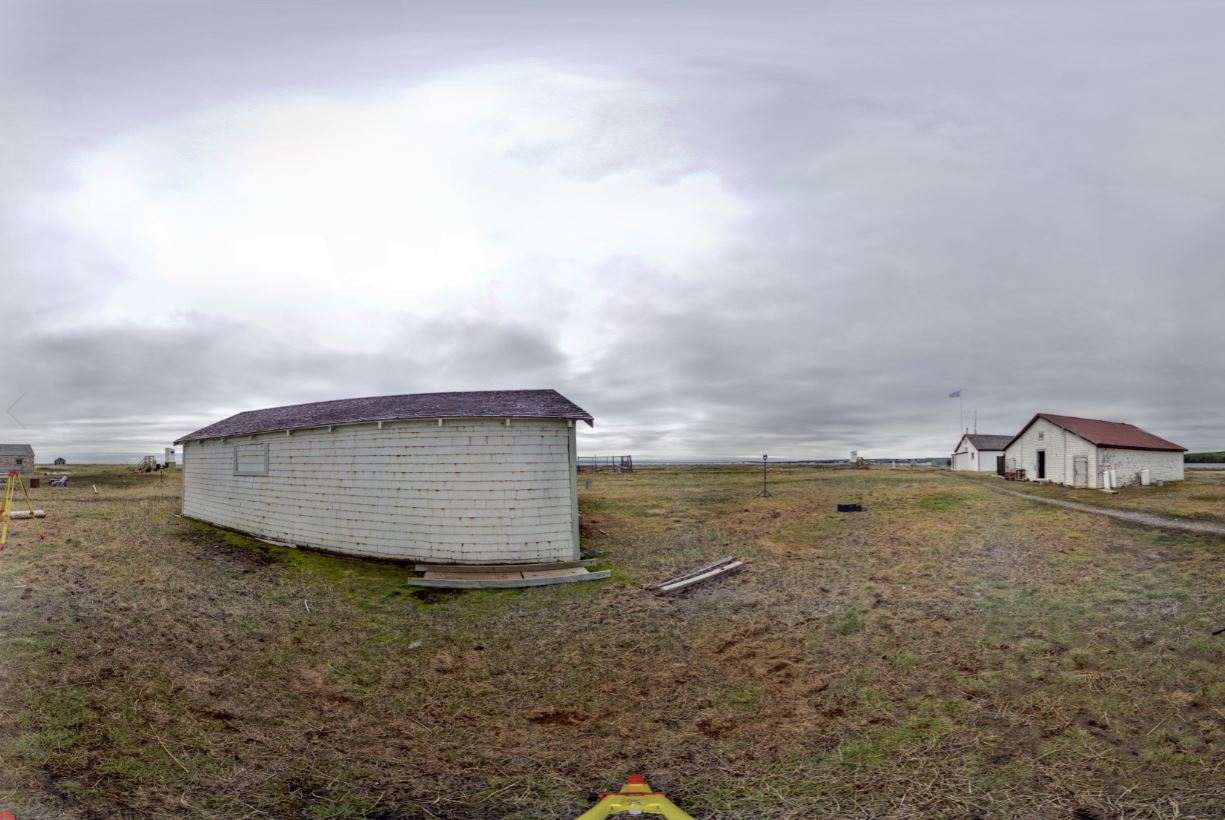 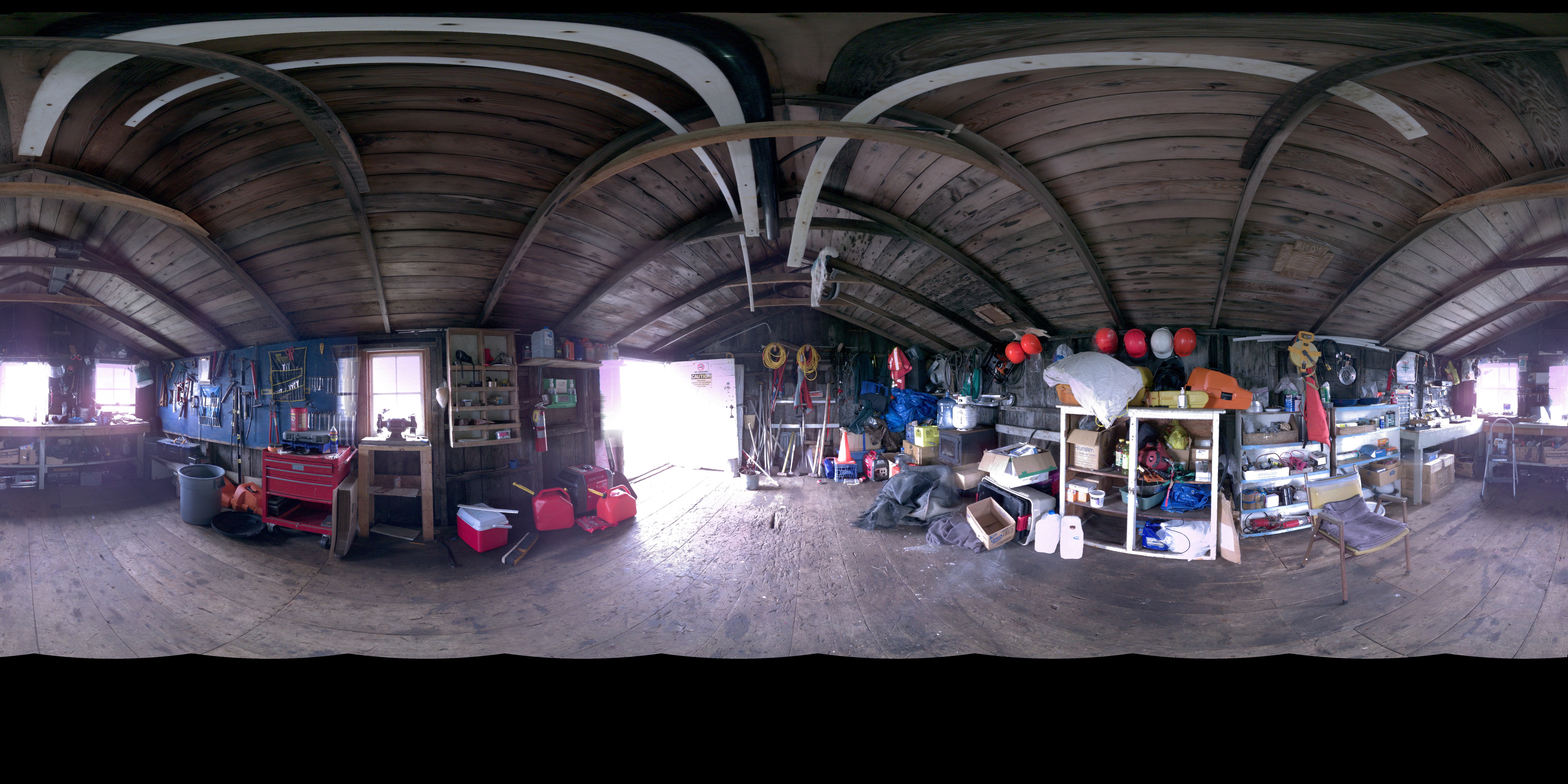 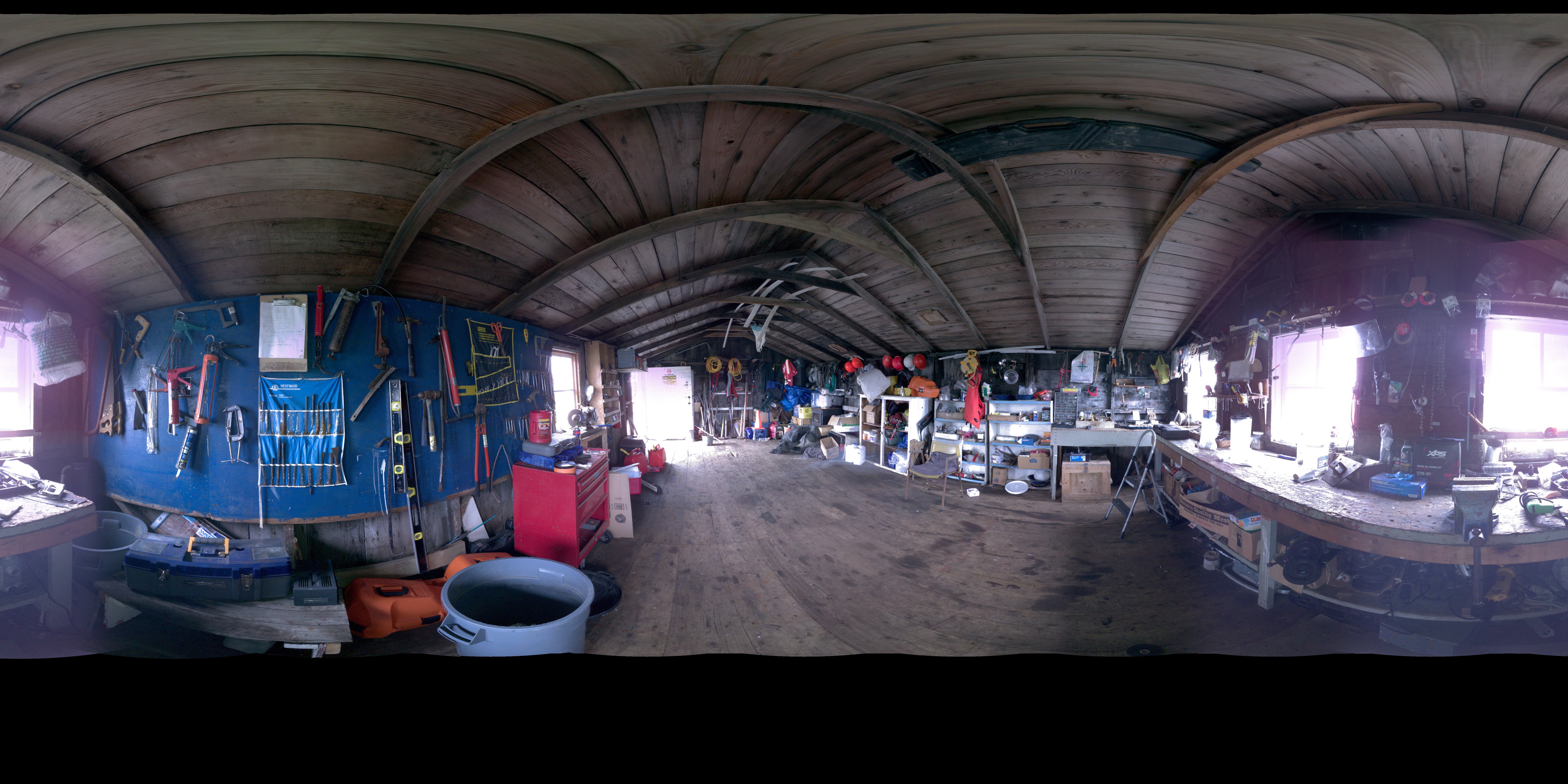