This building was constructed by joining two smaller, existing buildings together and was used by the Police in their dog-breeding program during the 1940s through to the early 60s. The Kennels are not normally accessible to the public as plywood is left over the doors to the building during the operating season. The Dog Run was constructed as a fenced enclosure using driftwood logs as posts with wire mesh fencing between the posts. Much of the fencing is lying on the ground at the present time although the posts still define the Dog Run. Neither the Kennel nor the Run are currently used. They have been stabilized so that they remain as features within the landscape of the Park.

History of RCMP on Herschel Island

Occupation of Herschel Island was growing with the arrival of the whalers and missionaries, and parties were interested in having a neutral authority to regulate tensions between the Euro-American and Inuvialuit inhabitants as well as those between ship captains and crews [1]. By 1903 the first detachment had arrived and camped into the fall. The next year a permanent detachment was established [1].

The beginnings of the North West Mounted Police (NWMP) on the island were mostly dedicated to monitoring the already present tensions and getting to know the people in the area; in 1909 the first Indigenous special constable was hired, recognizing that the skills and knowledge of the Inuvialuit were crucial for survival [1]. In 1910 the Herschel Island detachment was made subdistrict headquarters for the Royal North West Mounted Police (RNWMP) in the Western Arctic and became the base for regular patrols throughout the region.

At first, the police represented a federal presence on the island, but gradually started to implement federal law [1]. Government services were extended to the island, and social and cultural changes started to take place.

The Dog Kennels and Run

While famous for being the Canadian mounted police, horses were not suited to traverse across the Yukon landscape and were only used around Whitehorse and Dawson City [2]. To complete the vast patrol routes the RNWMP had to rely on Indigenous knowledge and travel by foot, canoe, and dog sleds [2].

Dogs sleds have been a fundamental part for traditional travel throughout the Arctic; until the snowmobile was introduced in the late 20th century, nothing surpassed dog sleds for Arctic travel [3]. Each sled dog was expected to pull 45 to 80 kilograms, and depending on the load, number of dogs, and weather conditions could travel 25 to 120 kilometers a day [3].

As sled dogs were invaluable for Arctic travel, the RCMP constructed the dog kennels with a wire-fenced dog yard in order to run a sled dog breeding program [1]. This program operated on Herschel Island in the 1950s and 1960s [1]. Herschel Island was an ideal place for the program due to the abundance of seal meat available which could be used to feed the dogs [1].

Prior to the construction of the dog kennels, one side of the shed of the Pacific Whaling Co. Bonehouse/ RCMP Warehouse was used as a kennel for the police dog teams [1].

The building was constructed by joining two smaller already existing buildings together [1]. The fenced enclosure was created using driftwood logs as posts with wire meshing between them [1]. Most of the fencing is now lying on the ground, but the posts define the area of the dog run [1]. The kennels are not accessible as the doors are covered by plywood. Neither the kennels or dog run are currently used, but have been stabilized so that they remain a feature of the park [1].

A note on terminology:

This gallery contains images of the past and present which show the RCMP Dog Kennel. 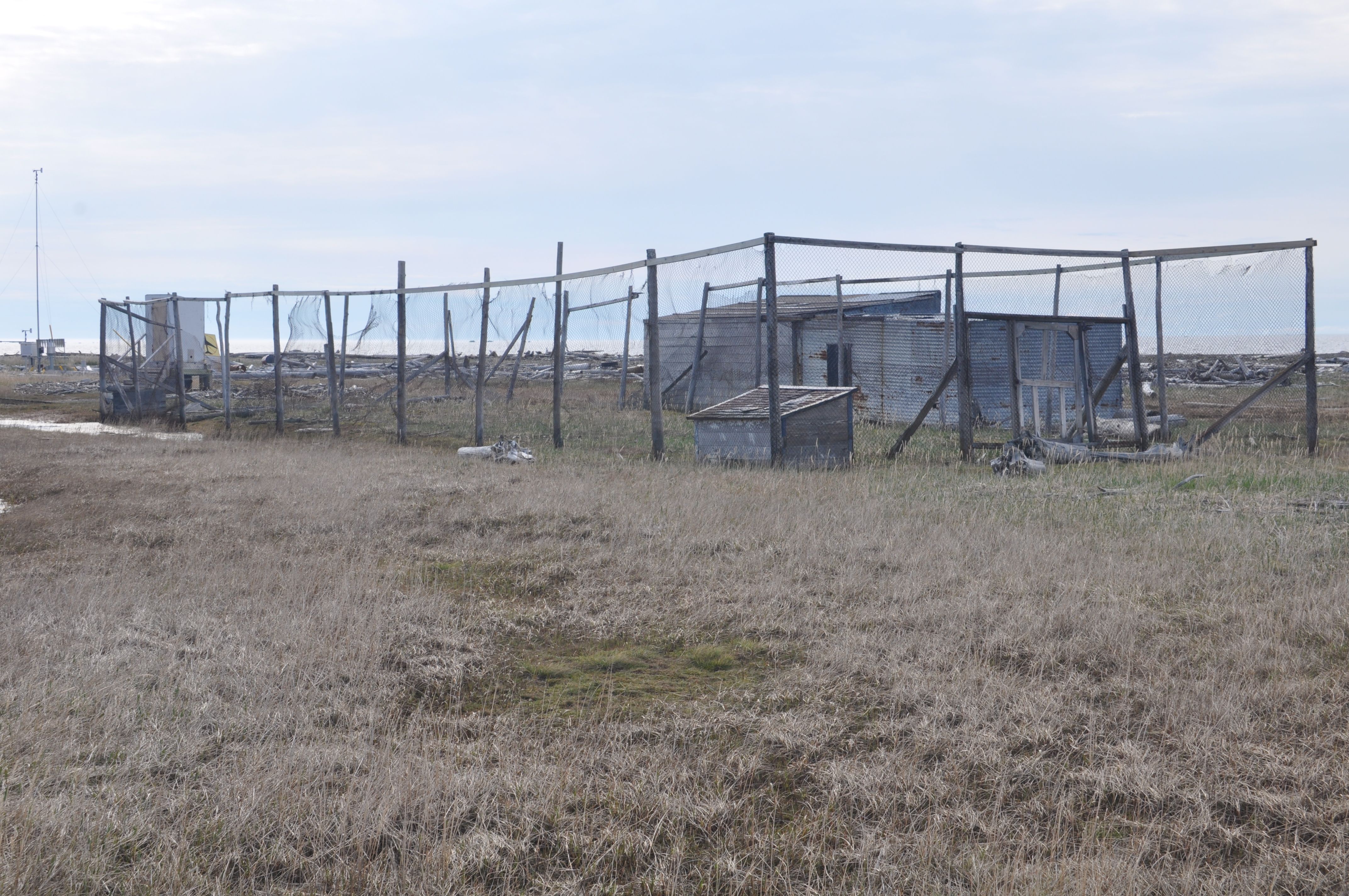 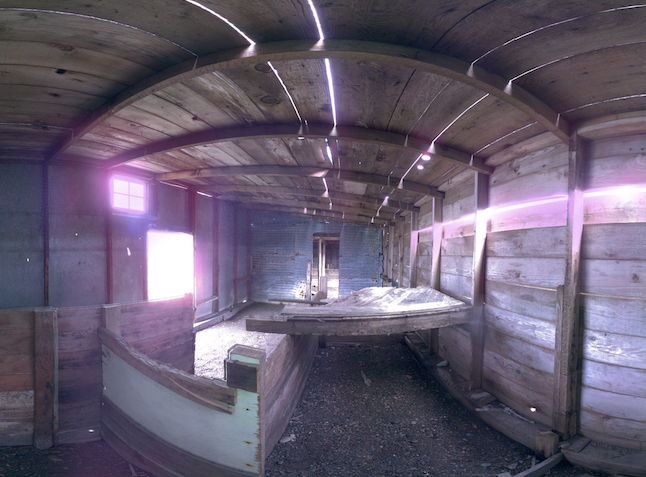 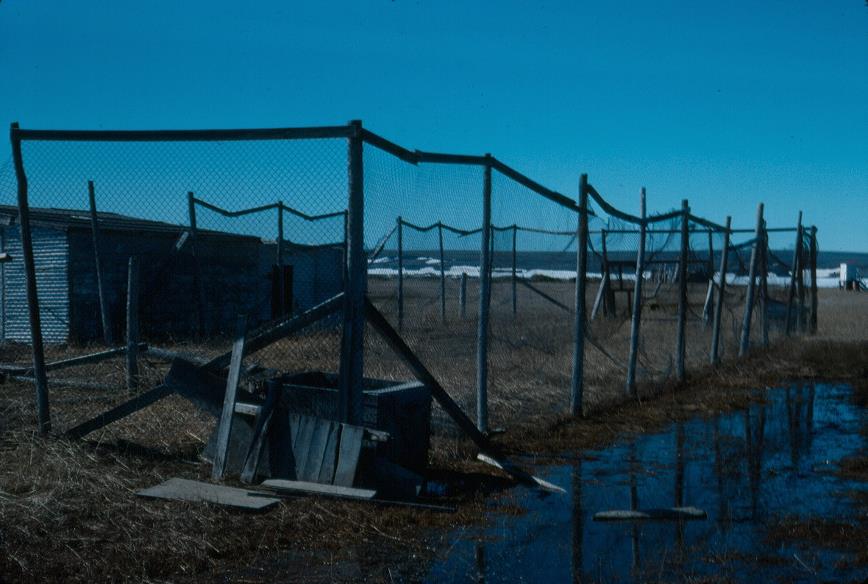 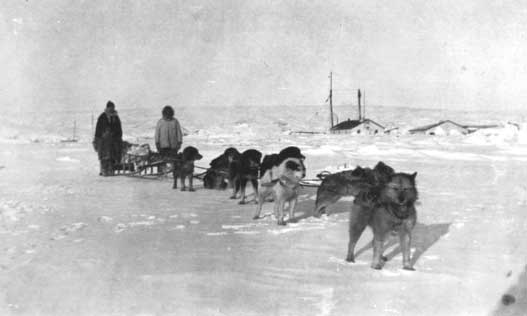 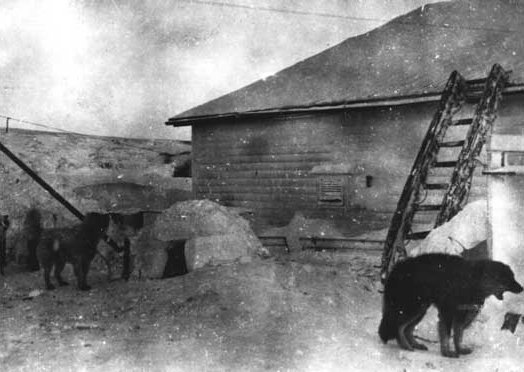 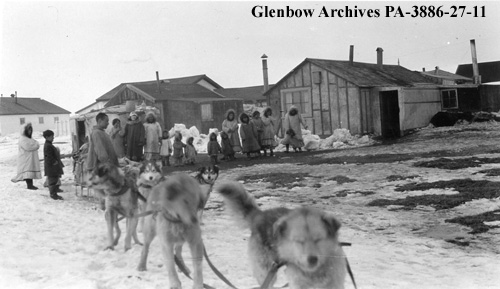 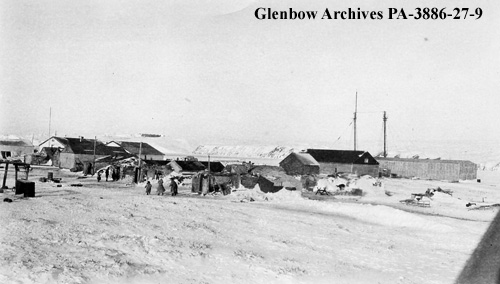 Click on the 3D model of Pauline Cove. Marker (6) shows the location of the RCMP Dog Kennel.

The RCMP Dog Kennels building was digitally captured with a Leica BLK 360 terrestrial laser scanner. The interior was captured with nine scanning locations, with one positioned in front of the open door to be used to combine the interior and exterior scans. No targets were used to capture the interior of the building, and scans were registered together using cloud-to-cloud registration in AutoDesk ReCap Mobile and Pro. 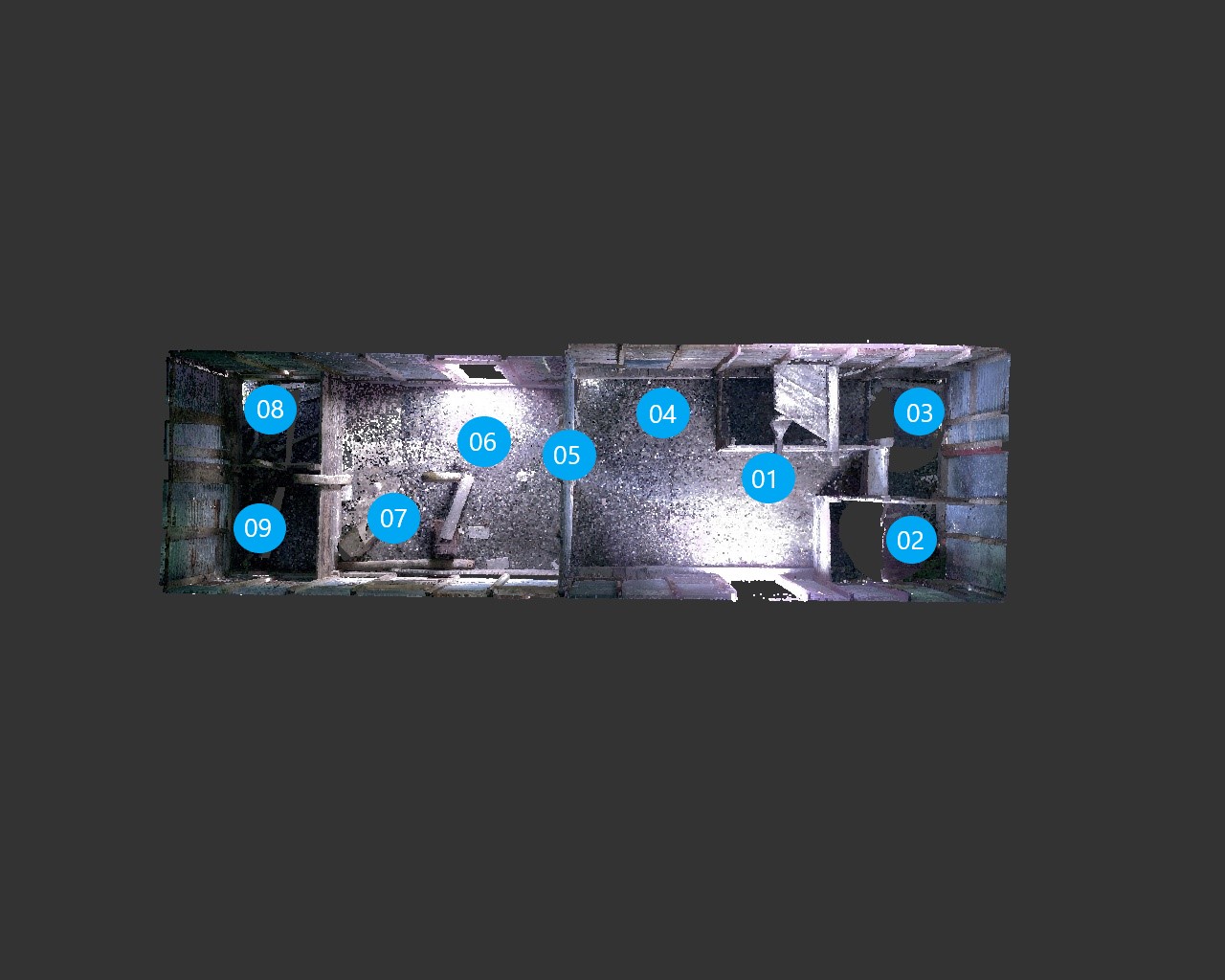 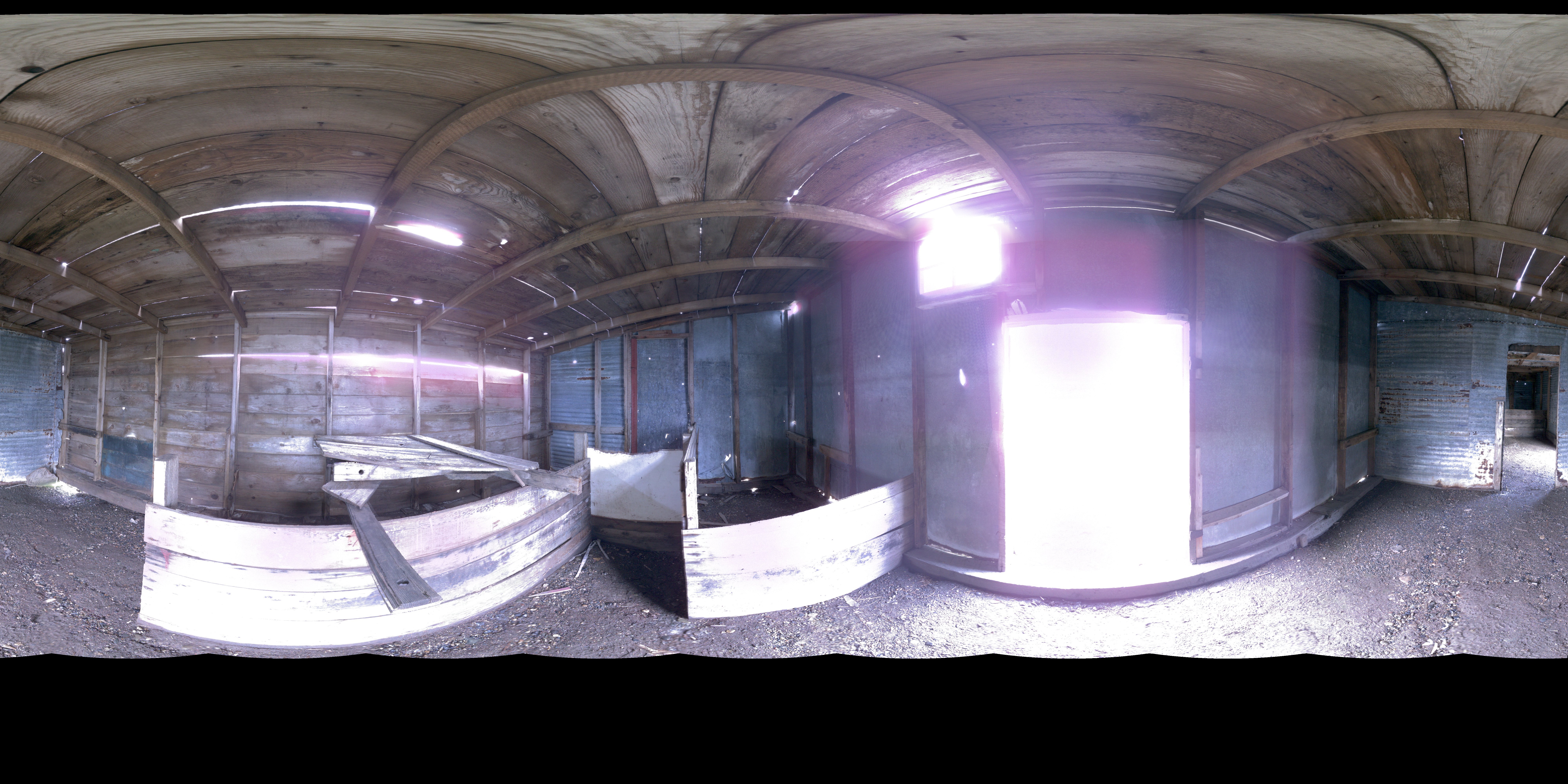 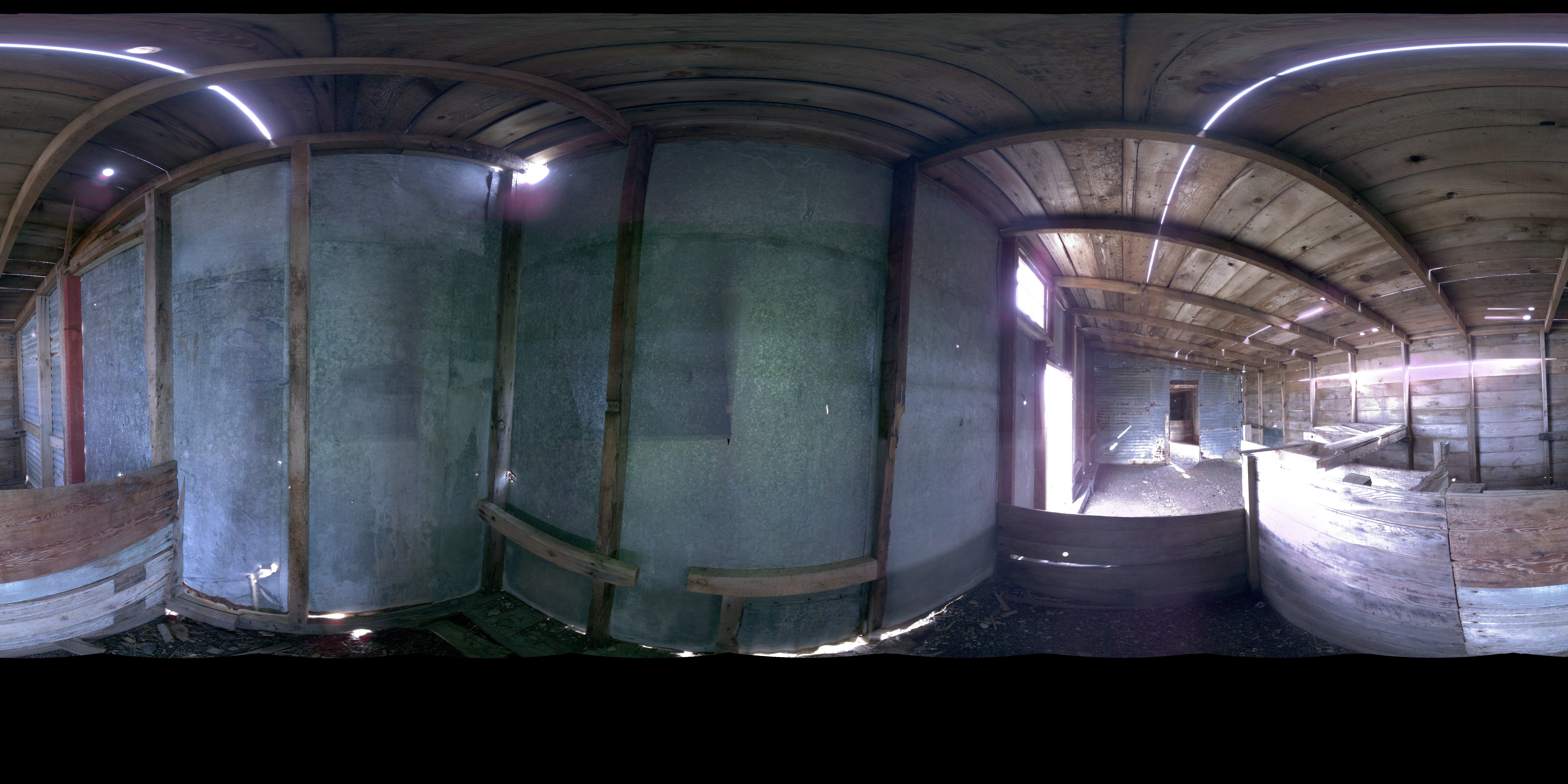 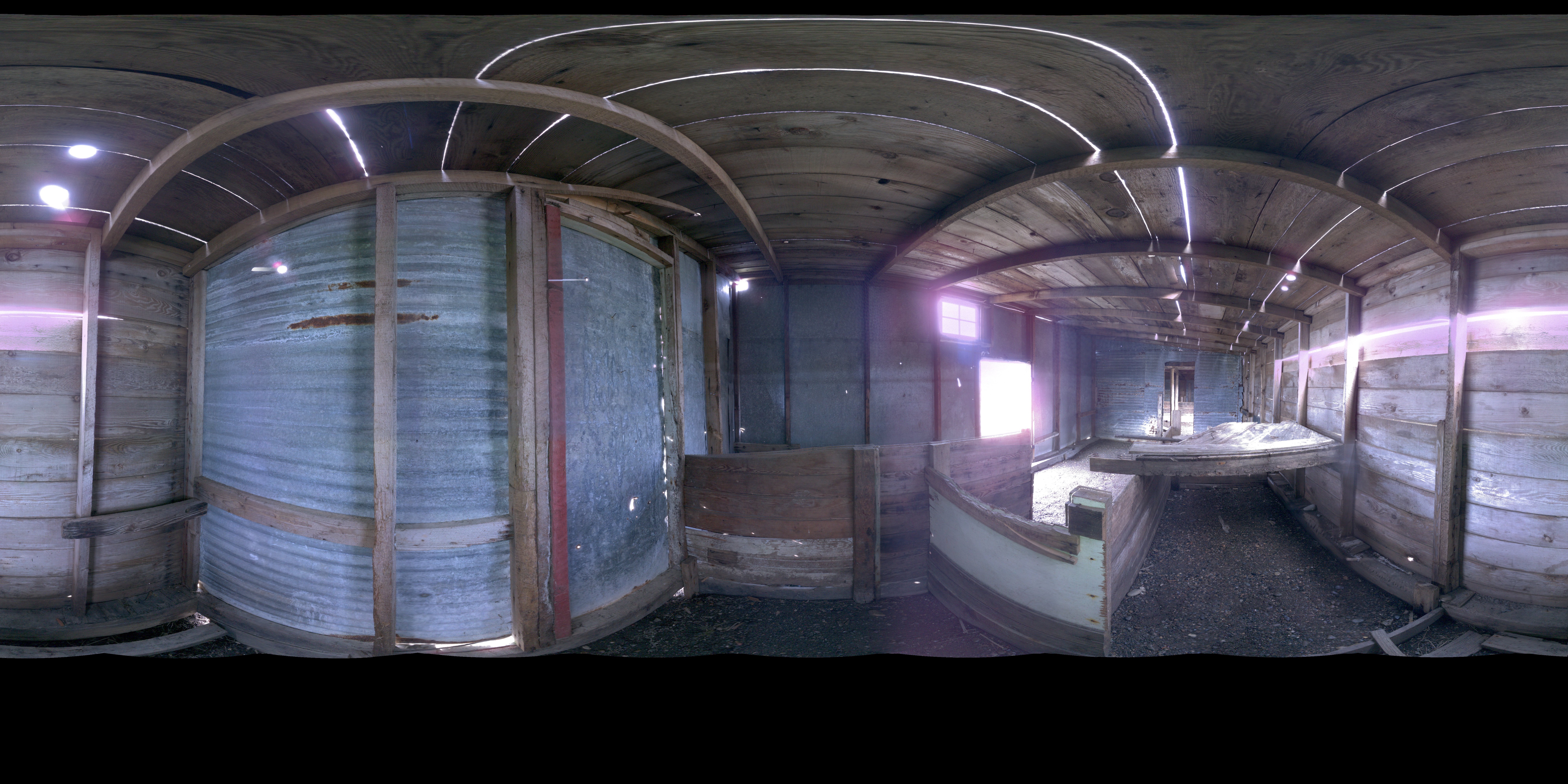 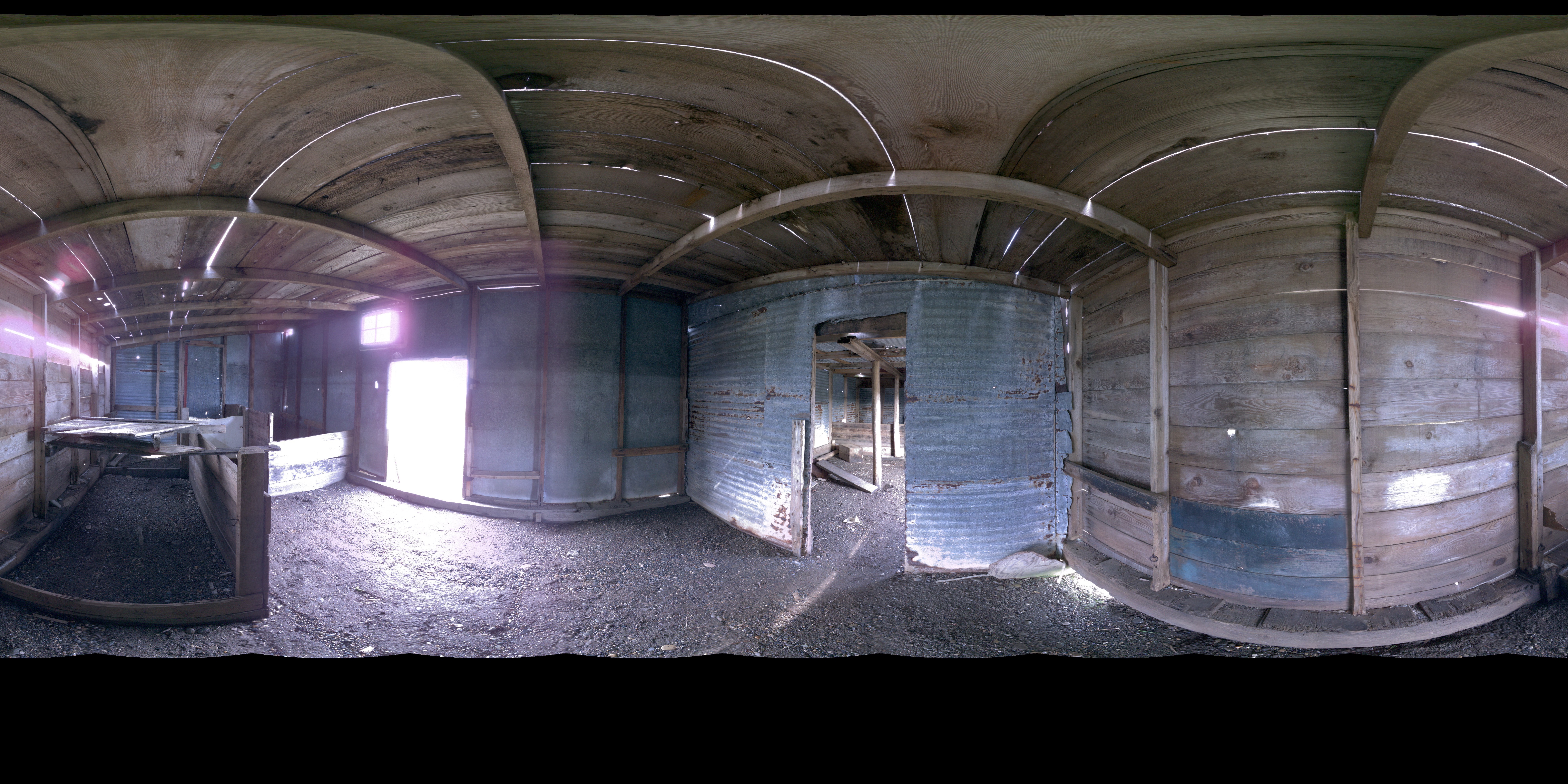 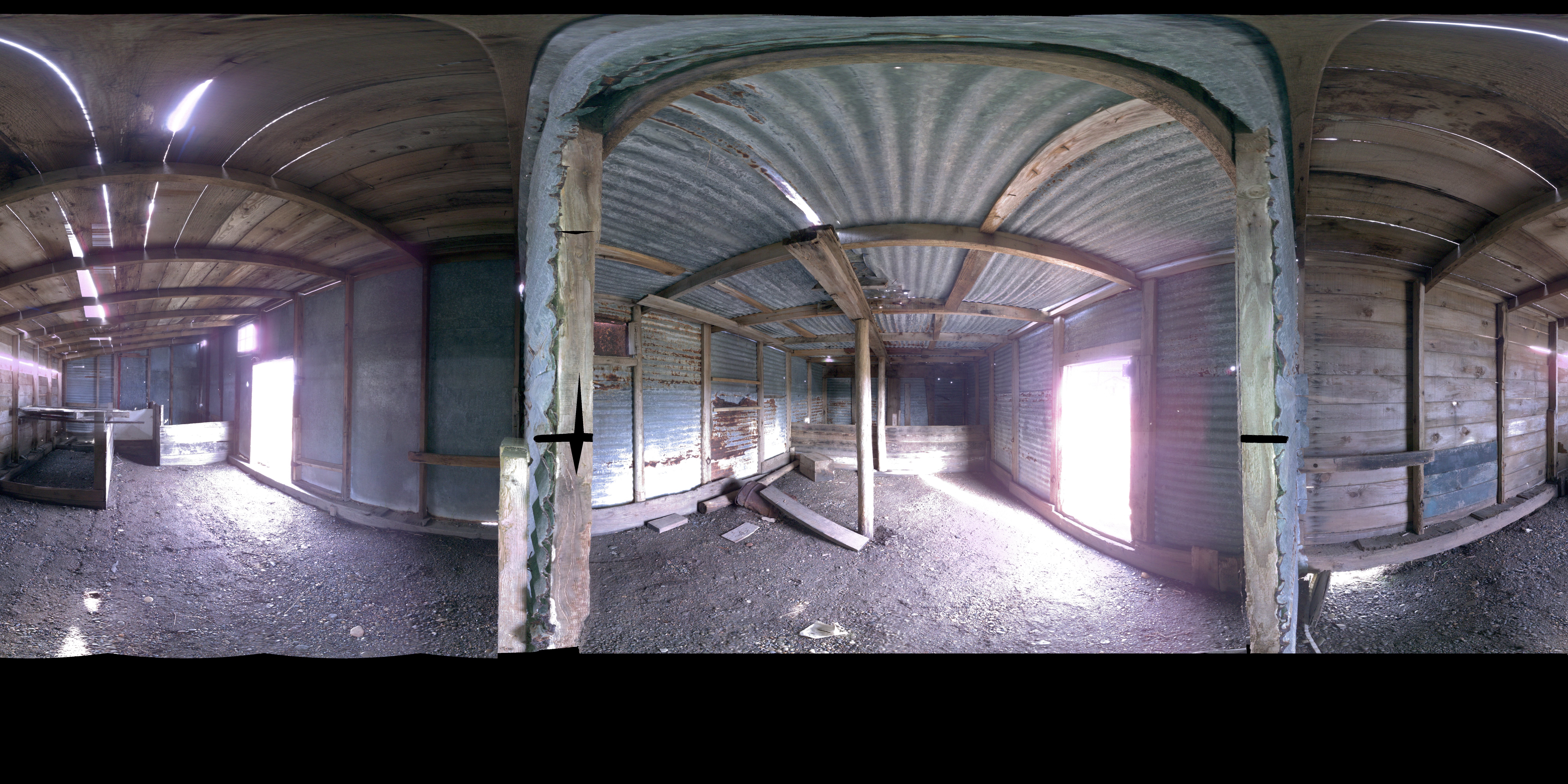 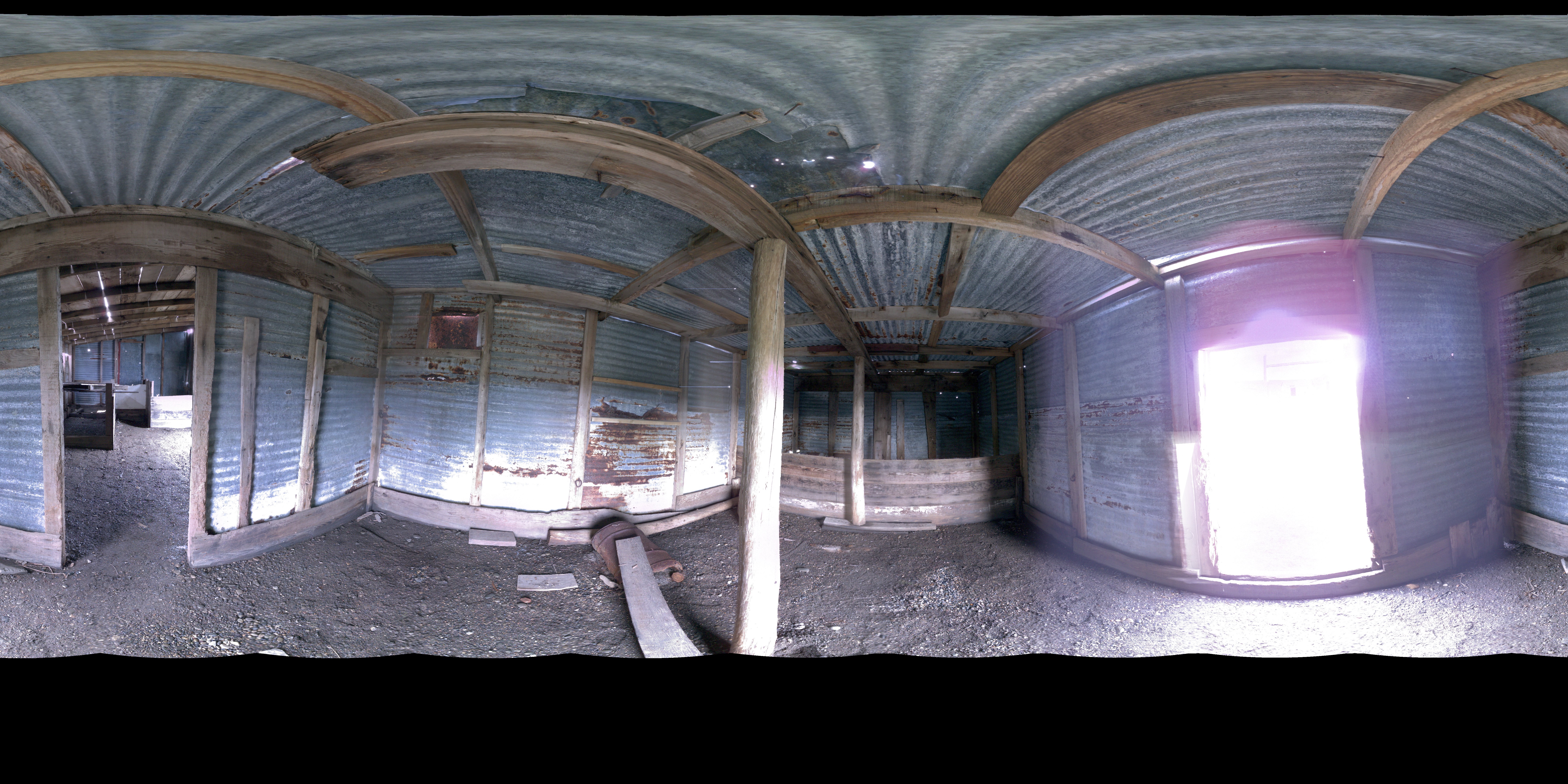 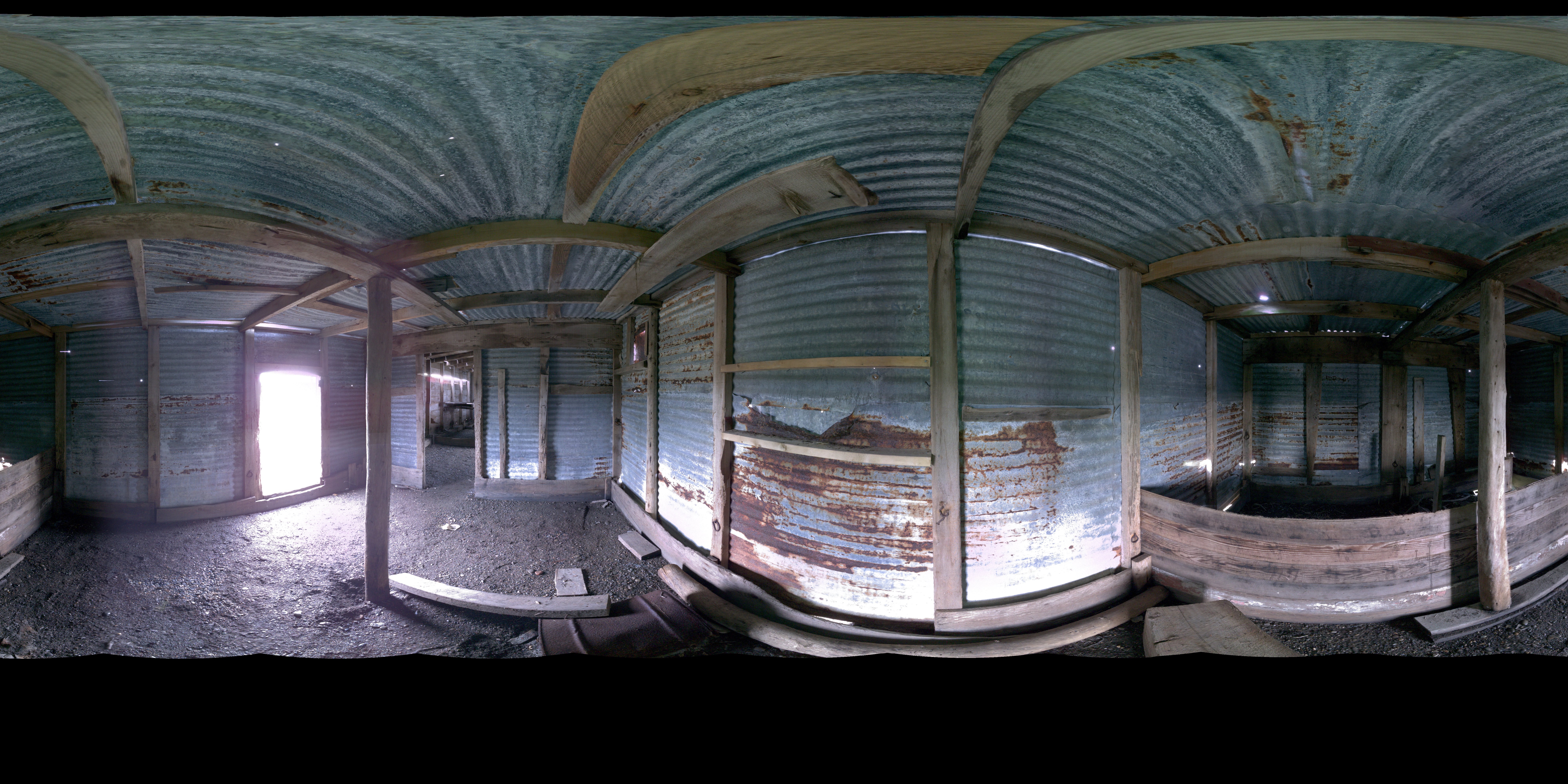 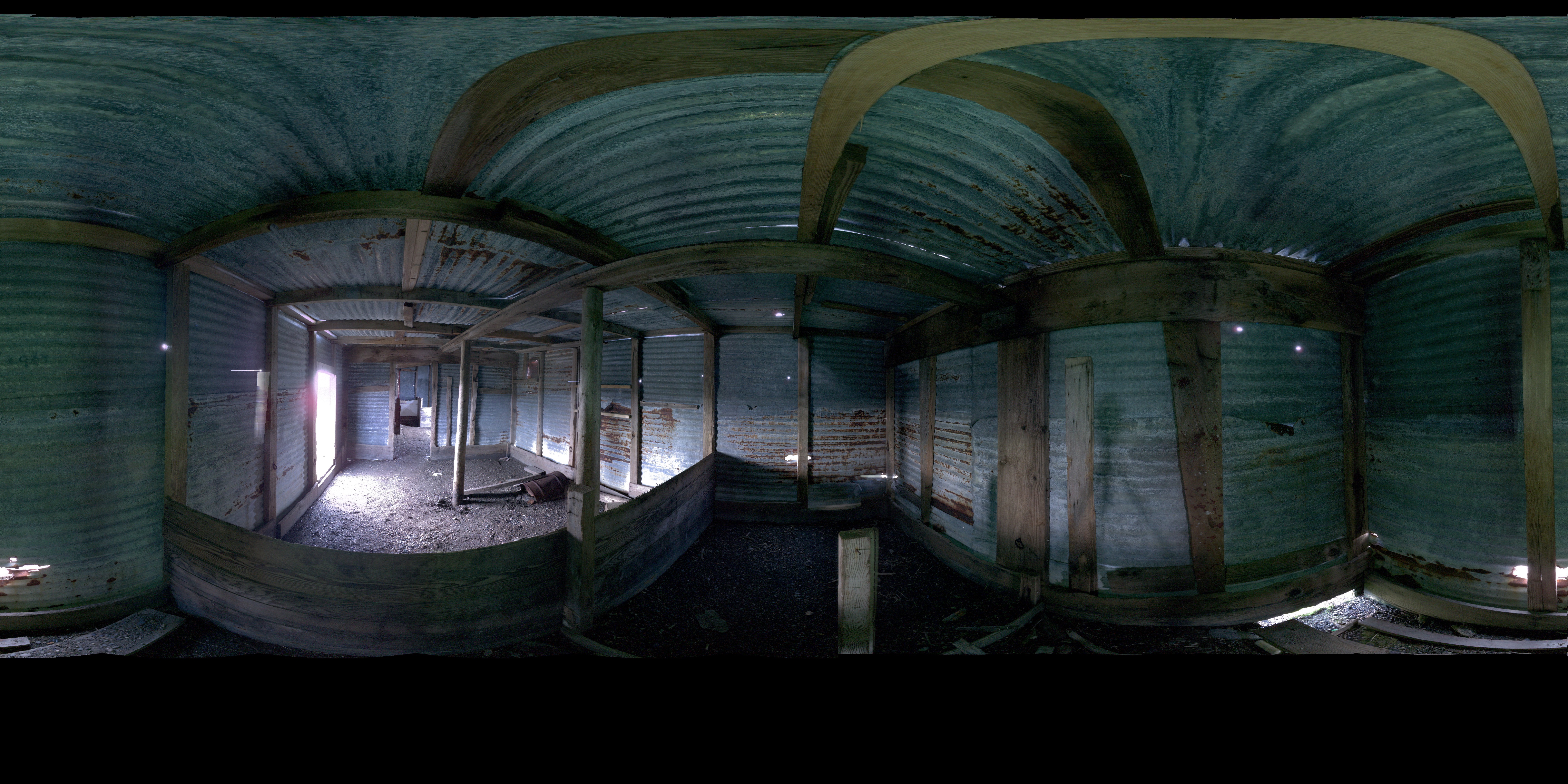 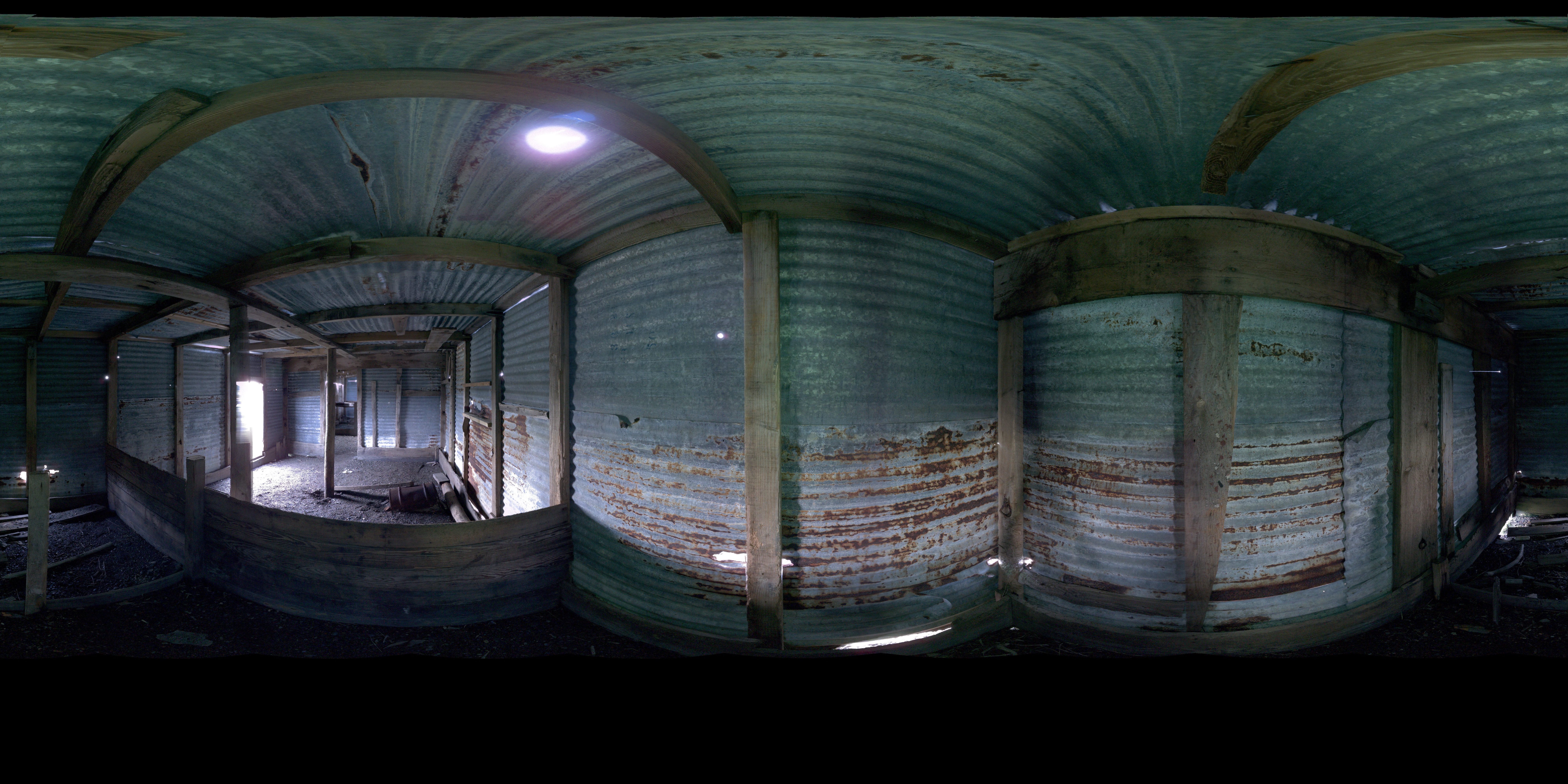 Grab the Slider With Your Mouse and Move it Left and Right to Compare the Architectural Plans and the Virtual Replica.

This slider shows on the top image the architectural plans produced in 2013 by the Yukon Tourism and Culture Historic Unit. The lower image is a cross-section of the point cloud data collected by the Capture2Preserv team from 2019 of the Community House.