Captain McKenna of the Pacific Steam Whaling Co. built this cabin for his own use in 1893. It was constructed utilizing materials left over from the construction of Building No.4. The building underwent a number of changes over the years including the shingling of the exterior and the refinishing of the interior several times. Work undertaken to conserve this building includes: re-roofing, re-shingling of the exterior walls, and replacement of the window sash. Other than repairs to the flooring no work was undertaken on the interior of the building. It is currently used to store personal equipment and gear for the Park staff.

James McKenna was born in Liverpool, England in 1846 and at the age of twelve left home to become a cabin boy and follow the sea [1]. Eventually, McKenna ended up in San Francisco which was a busy and important whaling port in the last half of the 1800s [1]. McKenna owned and captained many ships, becoming an infamous name in whaling especially for his ship Fearless [2]. Fearless was a whaling steam bark purchased in Norway and brought to its new San Francisco owner in 1893 [2]. The same year, McKenna Captained the ship to Herschel Island in pursuit of the Arctic bowhead whales [2]. McKenna and the crew stayed on Herschel Island until 1897 [2]. In 1901, the Fearless was lost returning from her third Arctic voyage in Dutch Harbour, Alaska [2]. While on Herschel Island it is likely that Captain McKenna built this house for his own uses in 1893, although the exact reasons and time of construction are not known [3,4]. It is also not known how long the building remained in use for or who it was used by after McKenna’s crew left the island [4]. This building does feature the earliest instance of graffiti on Herschel Island [4]. Dating to 1894 the words “R.E. Byrne May 7/94 Str Grampus” were craved into an exposed board, the Grampus was the name of another Pacific Steam Whaling Co steam bark [5].

The cabin was built out of materials leftover from the construction of The Pacific Steam Whaling Co. community house [4]. It is a small building, approximately 3.8 m by 5.7 m, built on beams resting directly on the ground [4]. The walls are sheathed on the exterior and were originally clad in Redwood siding leftover from the construction of the community house, later recovered in shingles. The interior walls are also sheathed and were originally clad in variety of materials in attempts to make the building more comfortable [4]. The cabin features a gable roof, framed with a simple rafter system and sheathed and shingled. The single door is located in the north wall, and there is one window in each the north and west walls [4]. The building has undergone serval alterations, including the shingling of the exterior and the refinishing of the interior walls [3]. For the purposes of conservation, the cabin has been re-roofed, the exterior walls have been re-shingled, and the window sash had been replaced [3]. The only work done in the interior of the building has been repairs to the flooring [3].

This building is currently used to store personal equipment and gear for Park Rangers [3].

This gallery contains images of Captain McKenna’s House as it appeared in 2018. Also included is a news clipping mentioning Captain McKenna which documents the perils of Arctic whaling during the late 19th and early 20th centuries. 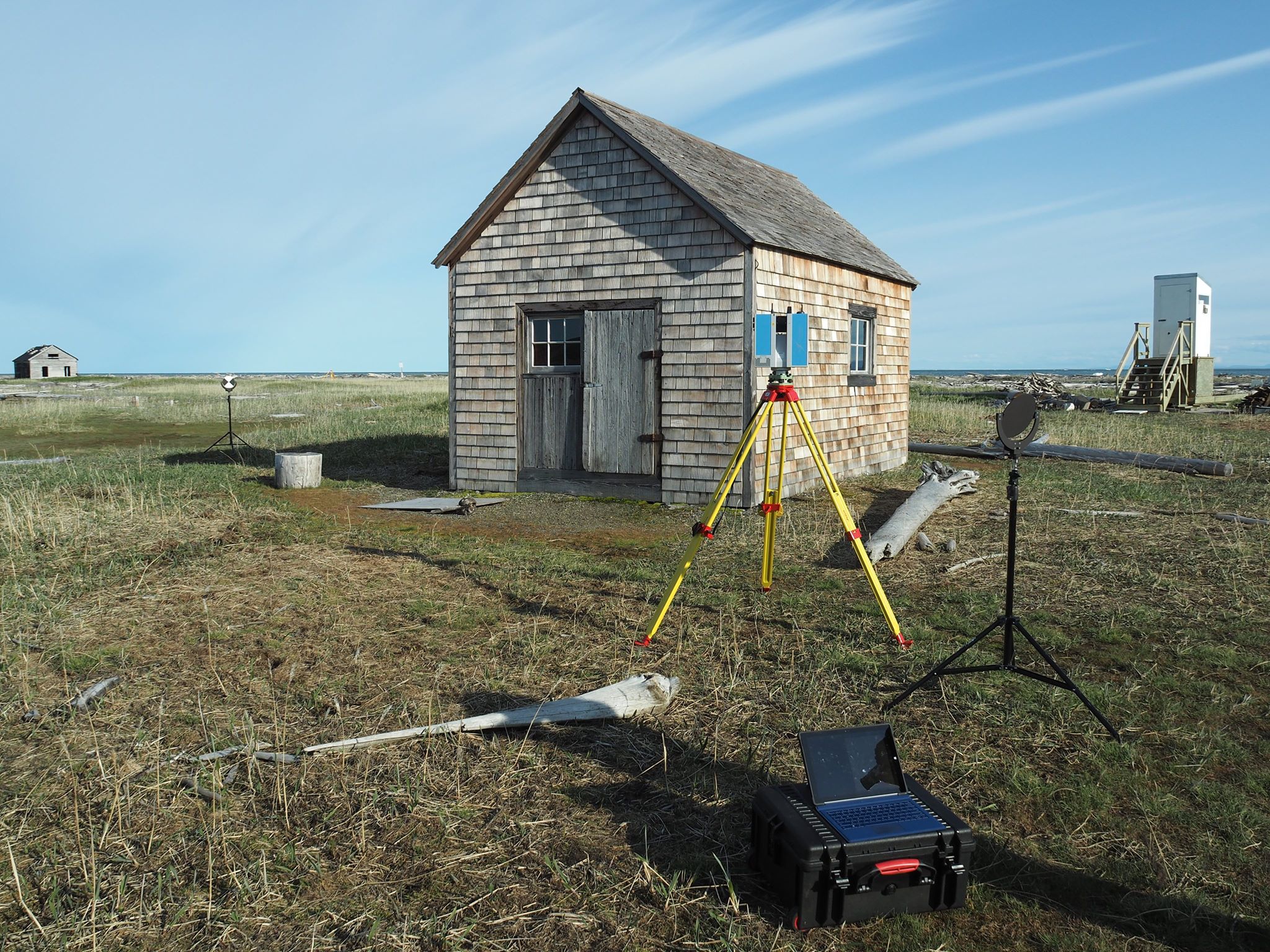 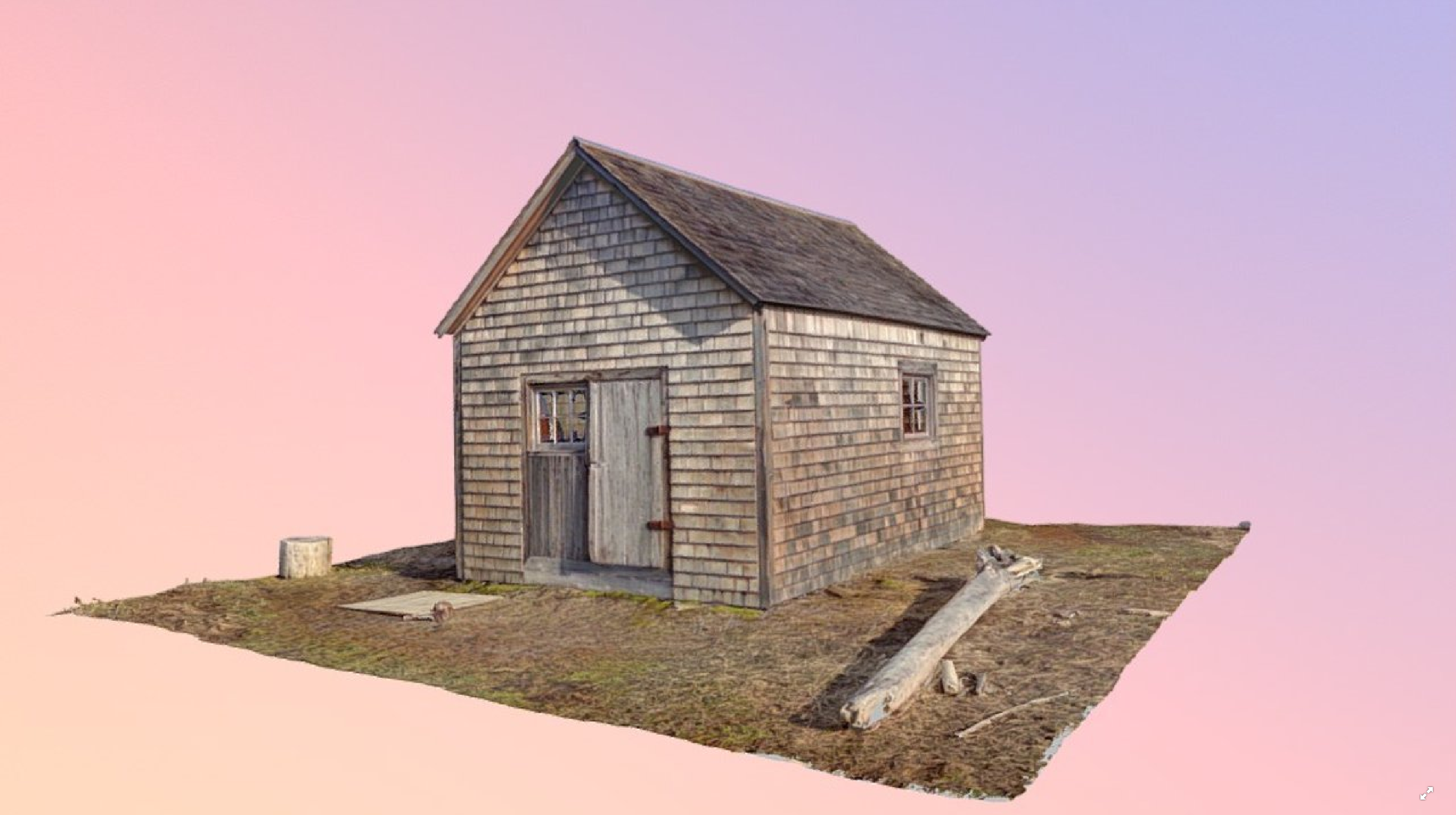 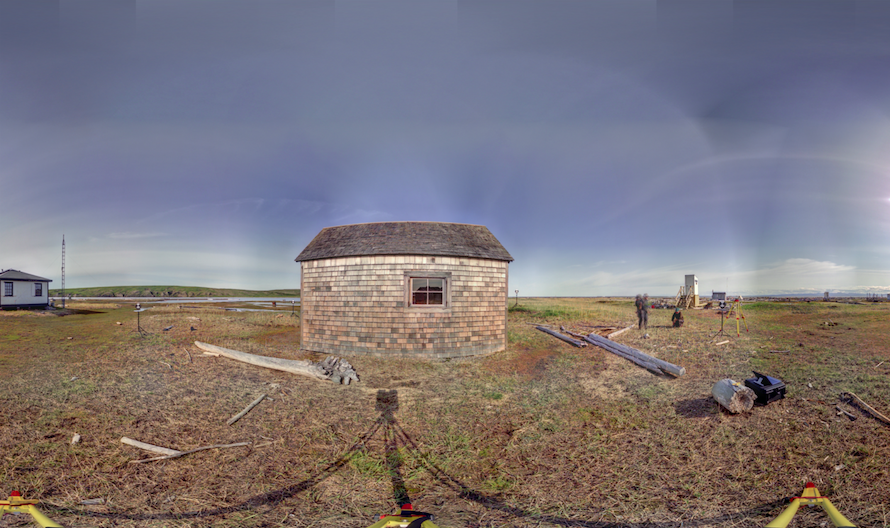 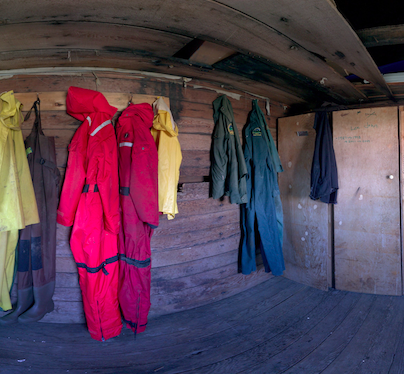 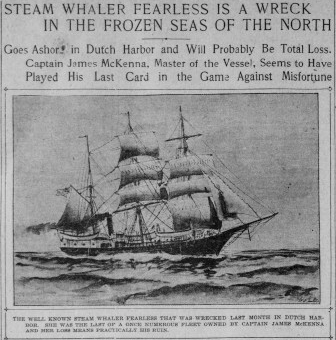 Click on the 3D model of Pauline Cove. Marker (9) shows the location of Captain McKenna’s House. 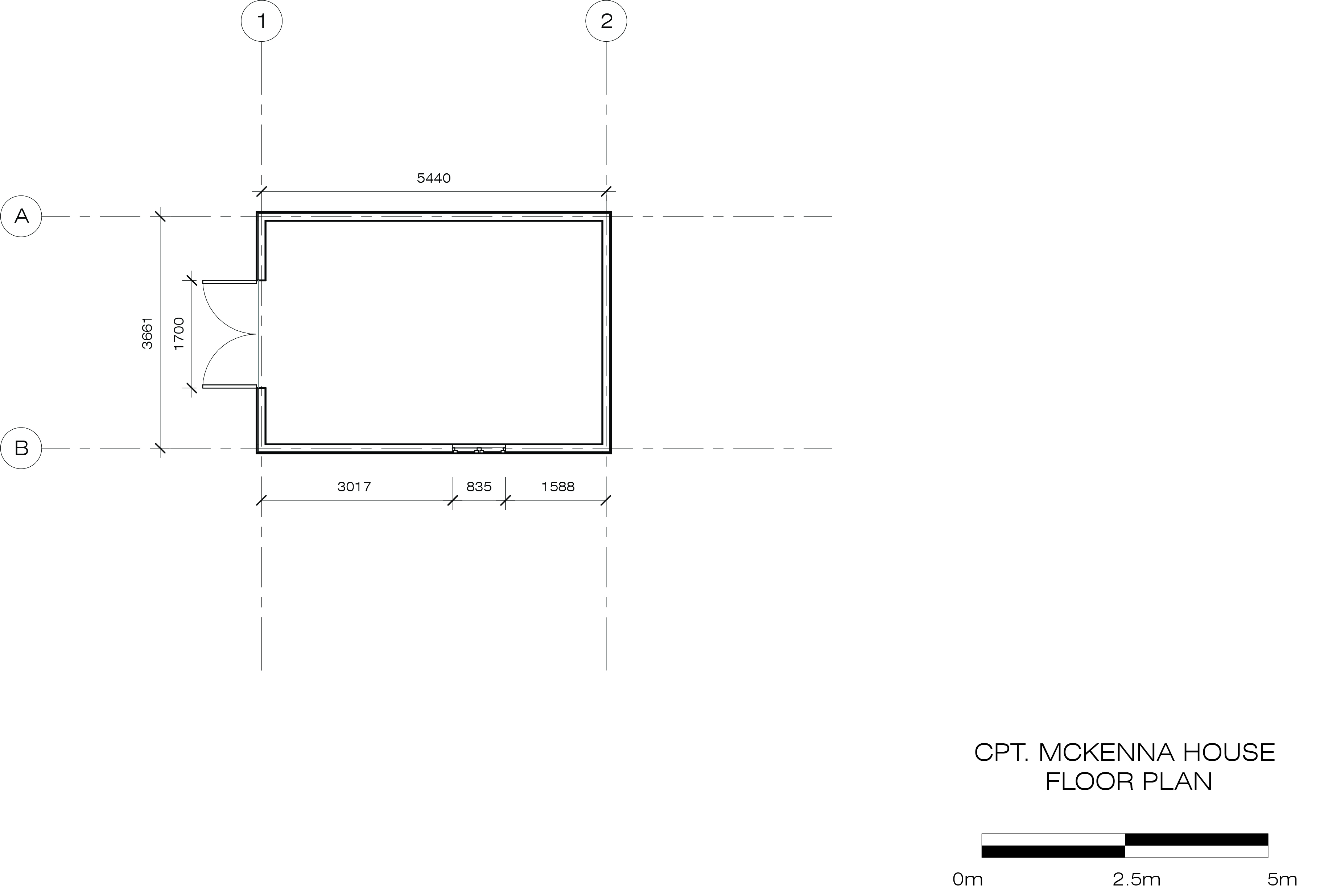 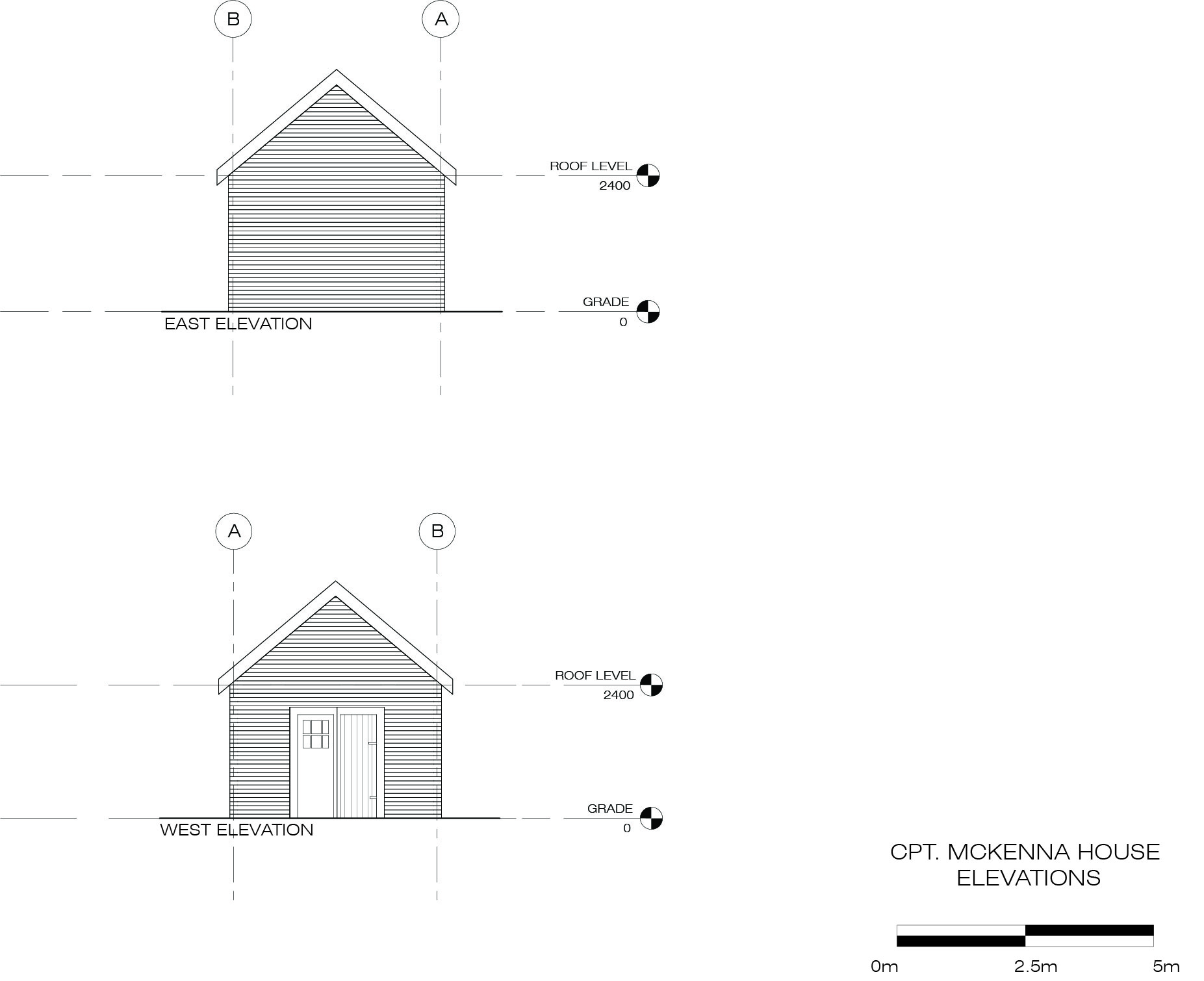 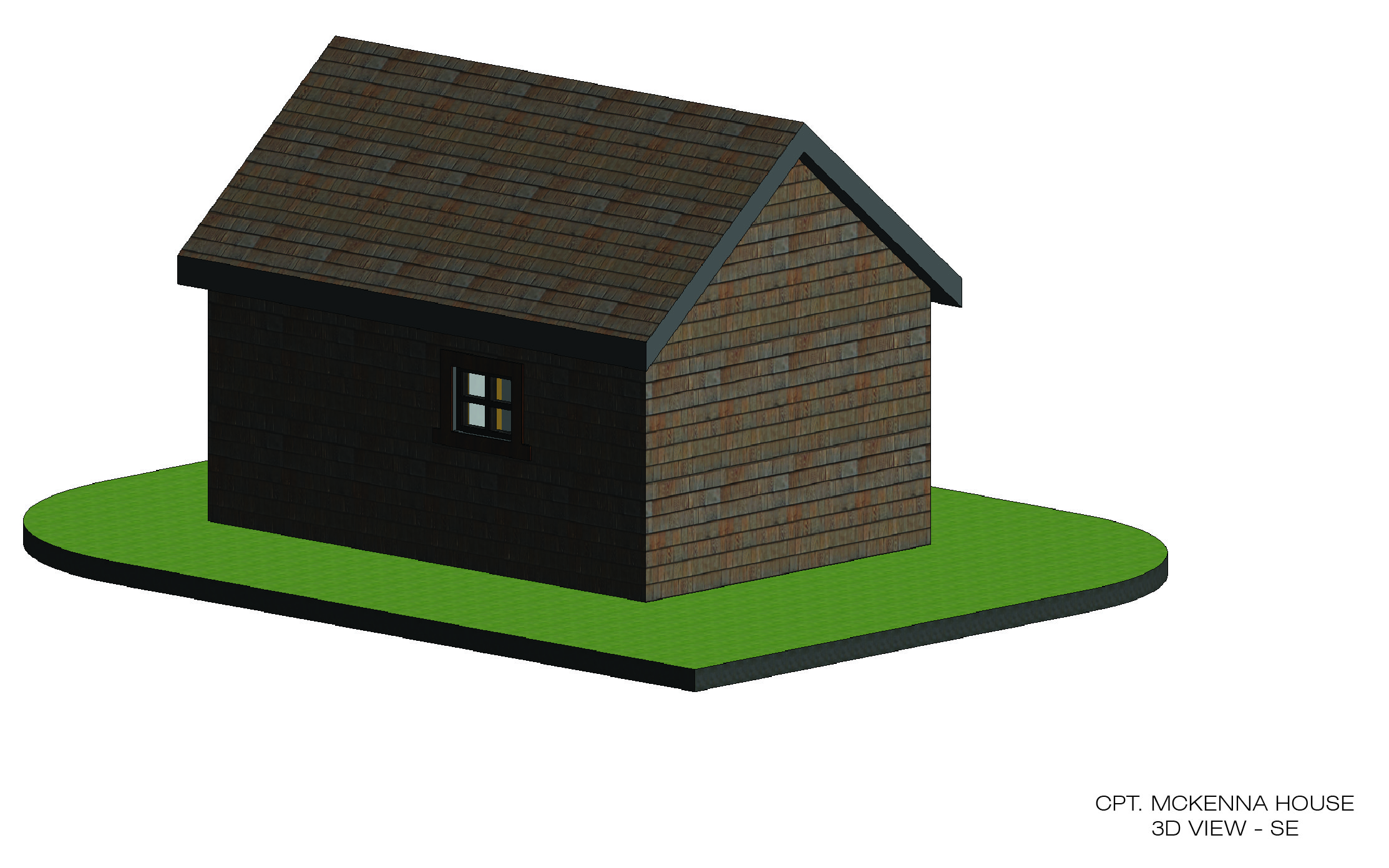 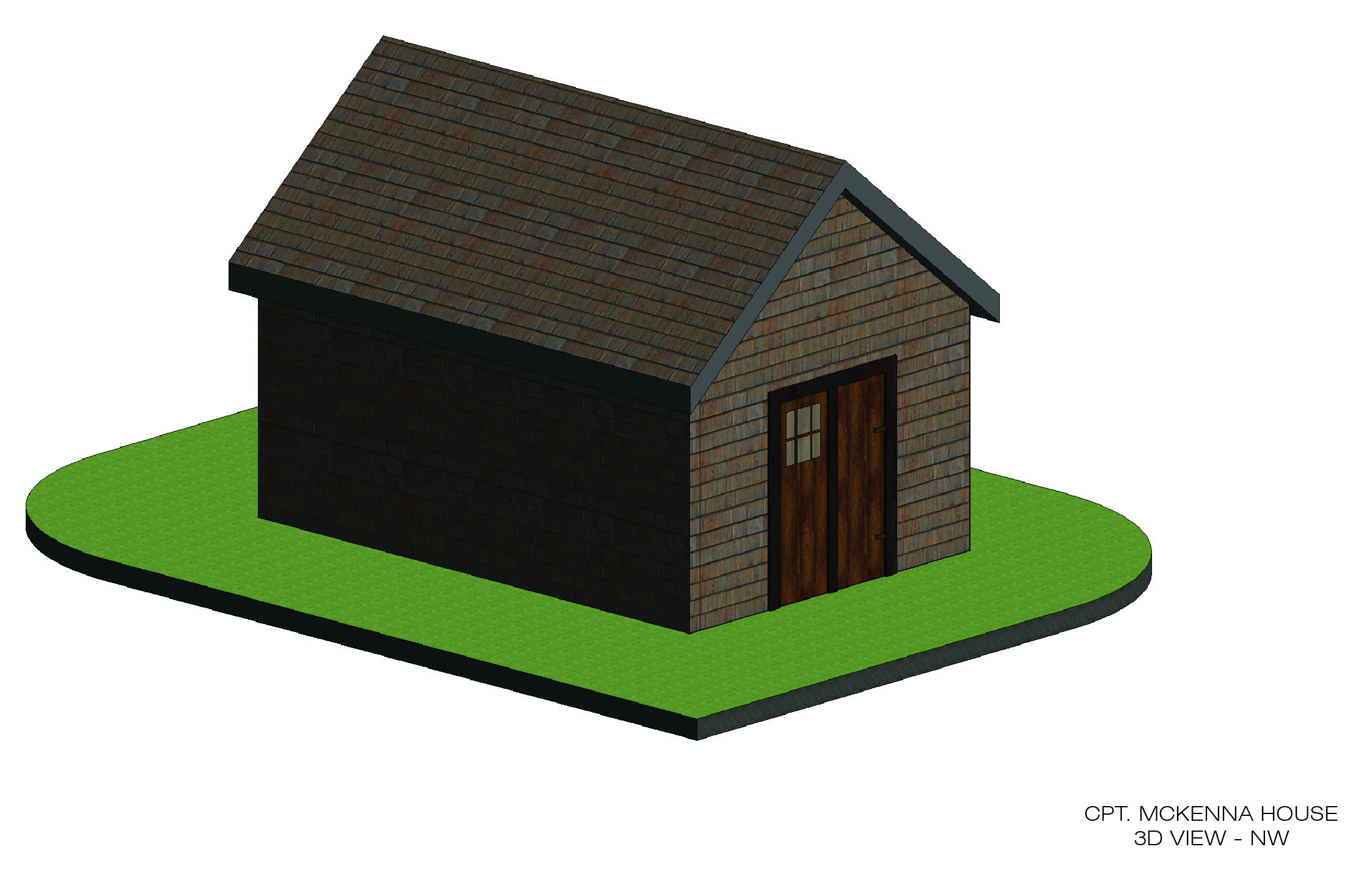 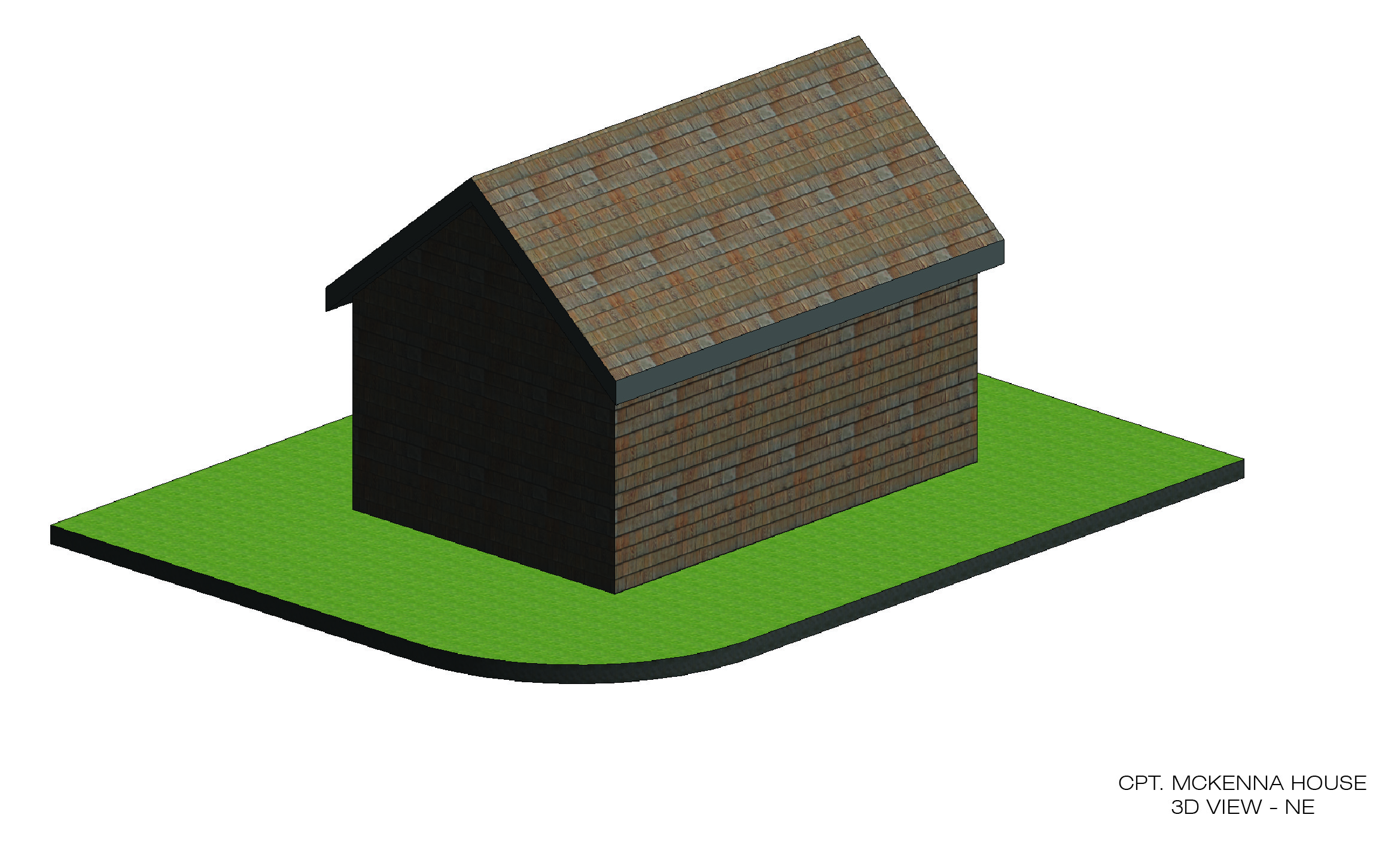 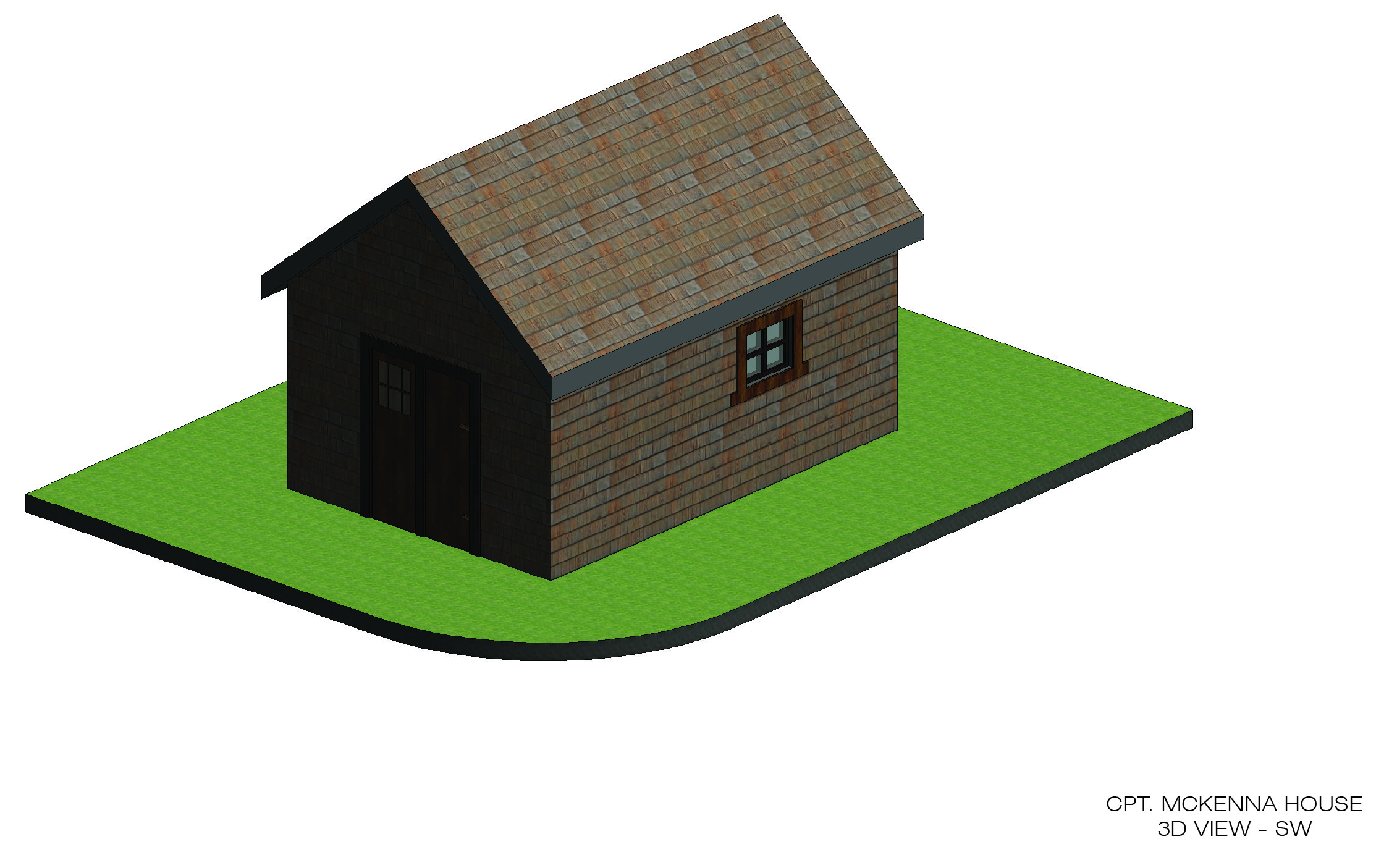 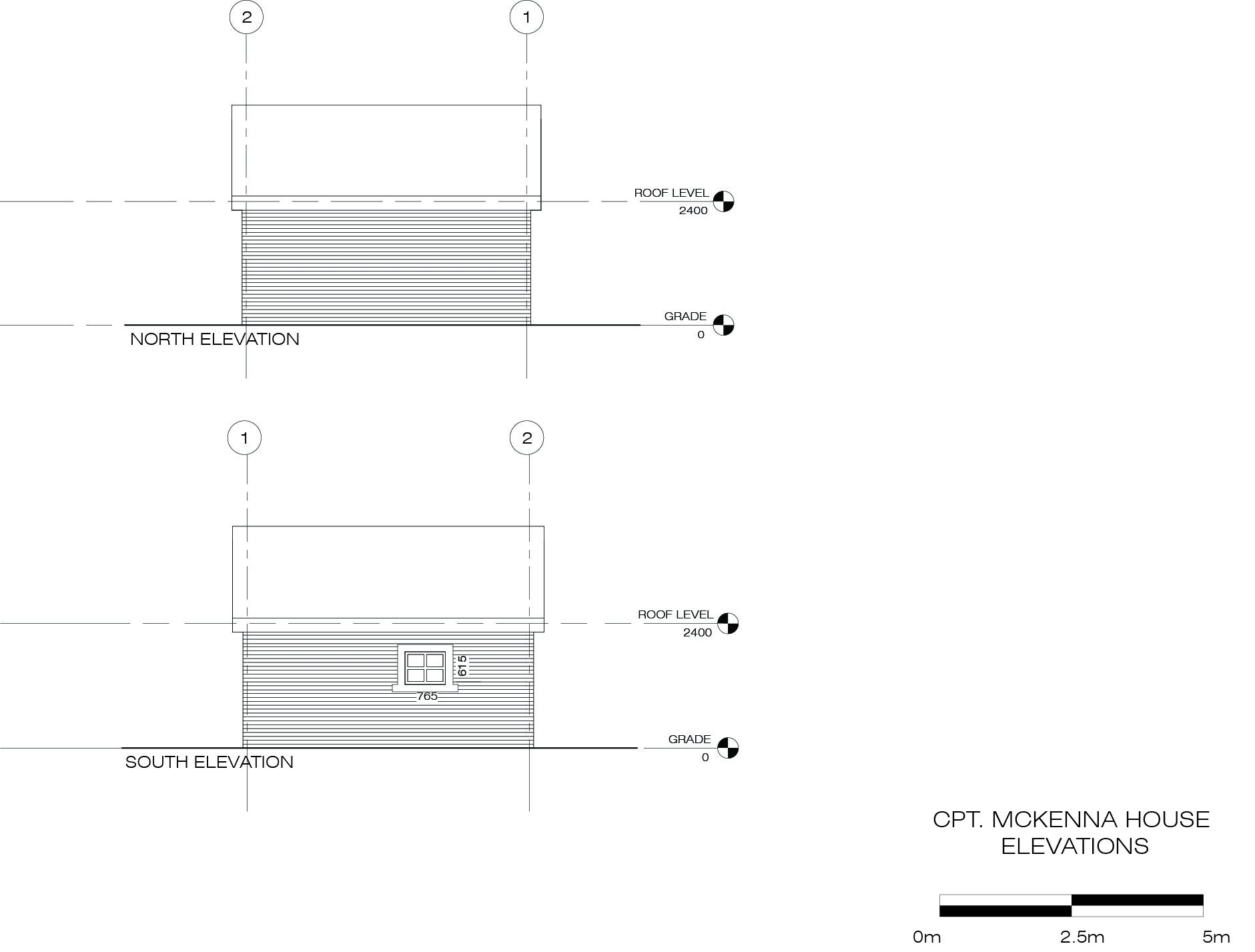 The exterior of Jame McKenna’s Cabin was captured first in July, 2018 with the Z+F 5010x scanner (red dots) using tripod mounted paddle targets. The paddle targets were strategically placed around the building and external area, such that no less than three were visible in each scanning location. The building was scanner with six scanning locations positions around the outside of the building in a circular shape. The exterior scan was registered using Z+F Laser Control software and then exported into AutoDesk ReCap Pro for further processing.

In July, 2019 the interior of the structure was captured using a Leica BLK 360 scanner (blue dots). No targets were used to capture the interior of the building, and scans were registered together using cloud-to-cloud registration in AutoDesk ReCap Mobile and Pro. 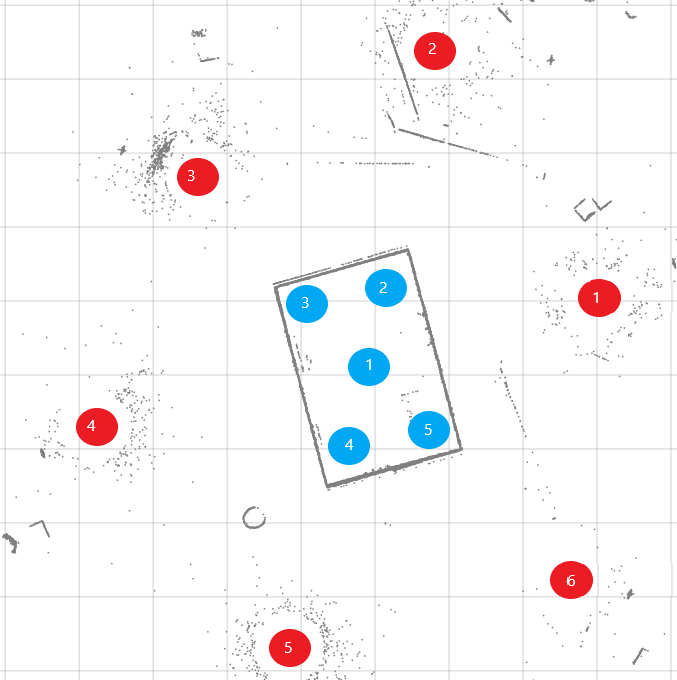 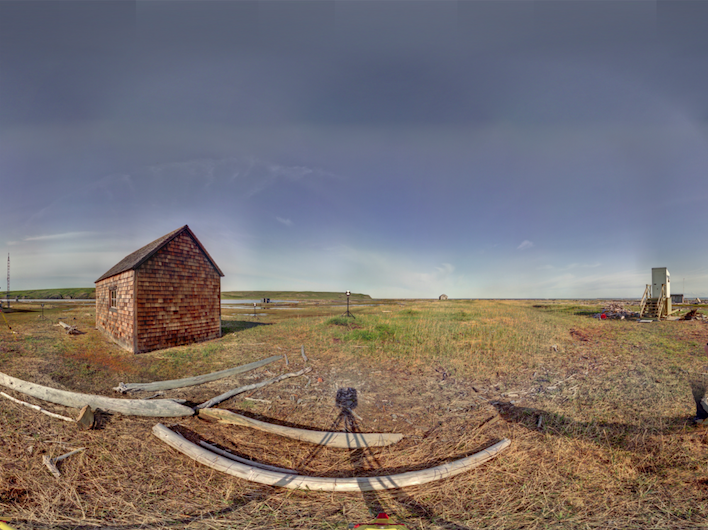 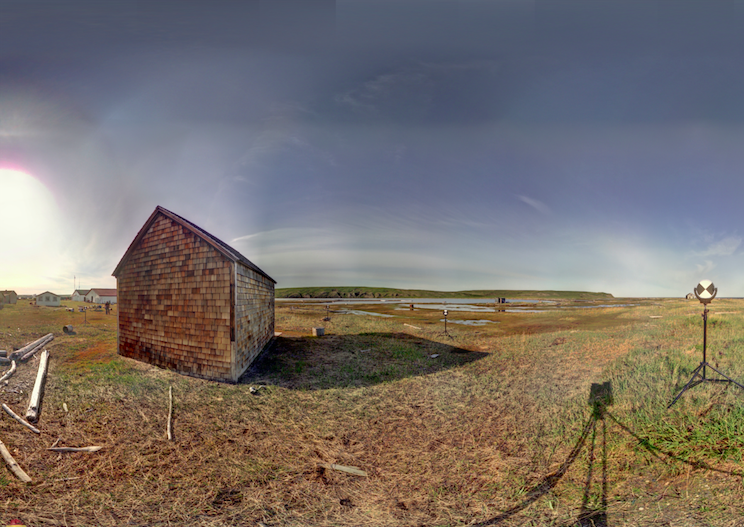 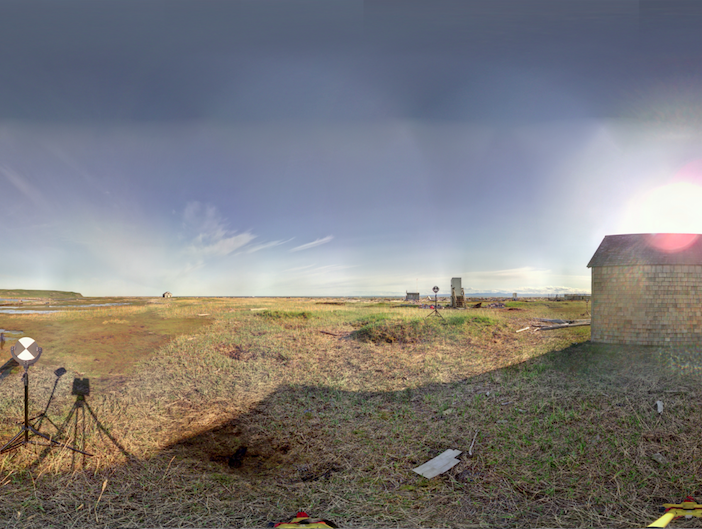 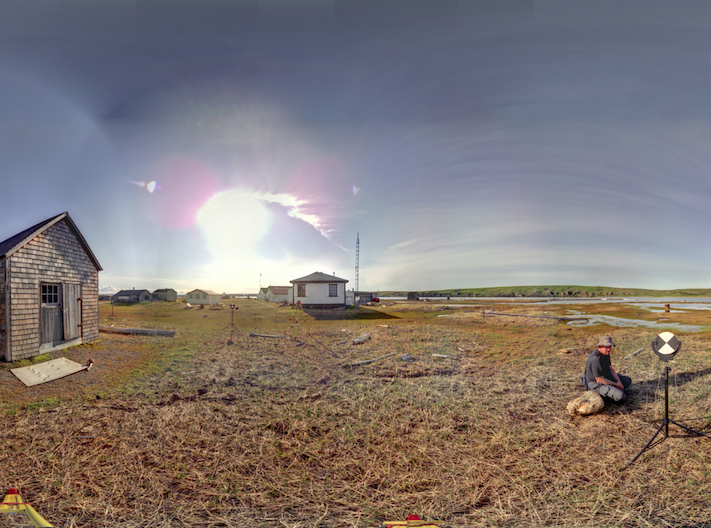 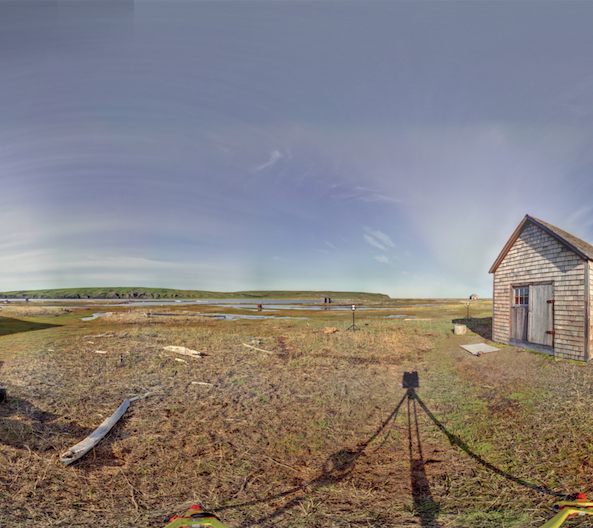 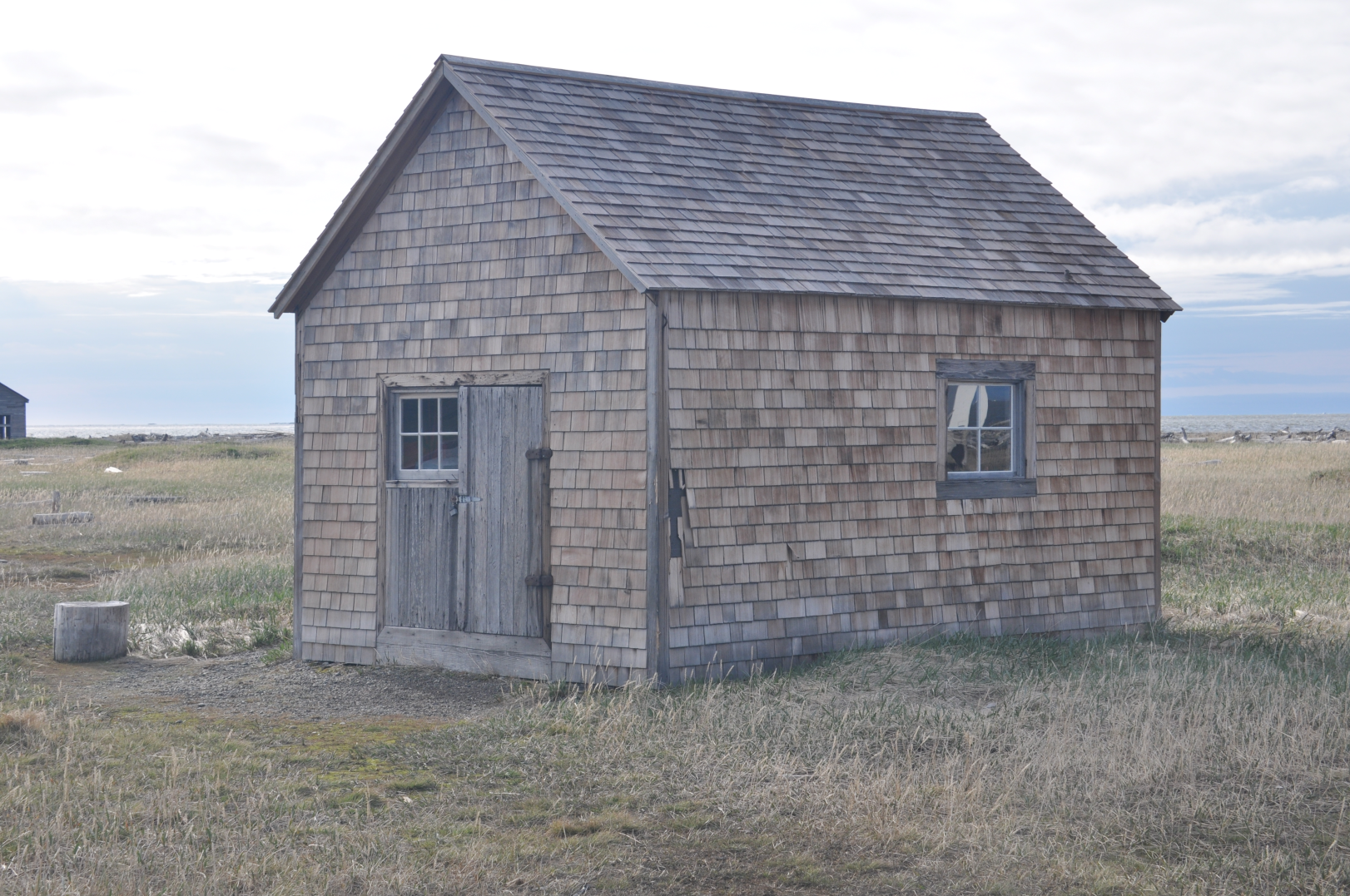 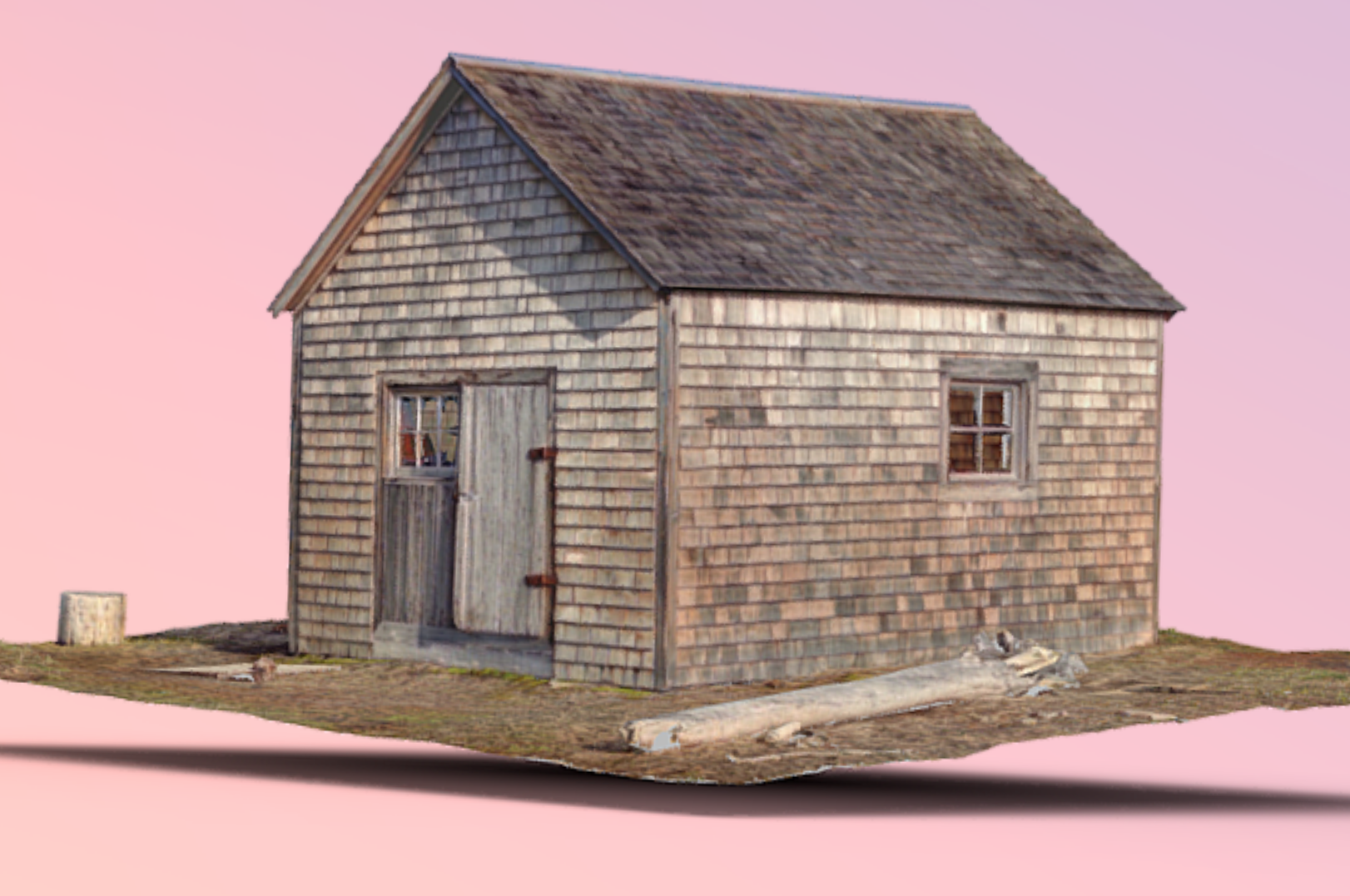 This slider shows on the left a picture of Captain McKenna's Cabin 2013, by the Yukon Government. On the right is a mesh created from the 3D point cloud collected in 2018 by the Capture2Preserv team.