This point cloud is of a Mackenzie Inuit sod house, one of the largest ever excavated in the Western Canadian Arctic. It was investigated over two summers at the Kuukpak site, located on the east channel of the Mackenzie Delta. The project was led Dr. Max Friesen, Department of Anthropology, University of Toronto. The house was scanned by Christina Robinson, University of Calgary. This unique dwelling is similar to sod houses found at Pauline Cove, Qikiqtaruk/Herschel Island – many of which are at risk due to flooding and erosion. Driftwood deposited by storm surges and ice rafting is also scouring out and covering over the remains of many sod houses. A computer reconstruction of this dwelling can be seen here: https://skfb.ly/6FZVu

Dwellings of the Mackenzie Inuit

Unlike many other groups in the Arctic, the Mackenzie Inuit had access to wood carried downstream by the powerful currents of the Mackenzie River [1]. Consequently, these groups did not have to rely on materials such as whalebone and baleen, or snow and ice for constructing winter houses – although such materials were occasionally used. There are three well documented types of traditional dwellings within the Mackenzie Inuit culture. The first is a type of summer tent called a qaluurvik [2]. Qaluurvik were tents made using frames constructed from willow branches. This dome-shaped frame was then covered with animal hides. The light frames and skins could be carried easily and would be used as shelter while travelling during warmer times of the year [3]. The next type of structure called a qatadjgit has been documented as part of major Mackenzie Inuit villages. Qatadjgit represent the largest of all Mackenzie Inuit structures, and could be up to 20 m in length. These structures were used for ceremonial events, or large ground assemblies [2]. The third traditional structure are semi-subterranean sod houses.

Sod houses are called igluryuaq and are often referred to as winter houses in most ethnographic accounts. While they were occupied primarily during the cold season months, oral histories suggest they were also occasionally used in the summertime [3].

Sod houses can contain up to three sleeping platforms – all of which opened onto a central area. Entrance to the dwelling was gained through a tunnel called a tuqsuuq, which was approximately 1.5 m long and slightly under 1 m wide [4]. The entrance tunnel would slant downward and served to keep warm air inside and cold air out. The dwelling’s interior was usually heated using oil lamps. A small open fire, located in either the center of the common space or in a small side alcove, was also sometimes used for heat and to cook food. A window in the roof, which would be sealed with animal intestine or ice, provided ventilation [5].
Bishop Isaac Stringer visited two igluyuaruit in the Mackenzie Delta region and found that the largest of these cruciform-shaped structures could contain as many as 25 people. In 1937, a still standing house was documented by Stringer’s successor of the Anglican Mission on Herschel Island, Charles Edward Whittaker, to be 3.7 m in diameter [6,7].

The first Inuvialuit settlement on Qikiqtaruk was found at a site near Pauline Cove. It was named the Washout site by archaeologists because it was literally being “washed away” by wave action and erosion during excavations in 1954 as well as during the 1970’s and 80’s. Remarkably, no traces of this site remain today [1]. Washout was occupied for several centuries beginning around 1200 AD until 1600 AD [1]. In total it contained nine known sod house structures, although it is likely that the original site was much larger. These structures appear to be from different time periods, but since they eroded quickly there is insufficient archaeological evidence with which they could be dated [1].

Following this earliest settlement, Qikiqtaruk was continuously occupied. Archaeological excavations of sod houses built at Pauline Cove indicate they are more recent than Washout. In total, the remains of almost 20 Inuvialuit houses from the proto-historic and historic periods have been documented in the Pauline Cove area [1]. While the sites at or near the cove are the largest and most important Inuvialuit settlements on Qikiqtaruk, additional archaeological sites on the island have also been identified at Osborn Point and Avadlek Spit [1].


Sod houses would typically be built in the late summer when the permafrost had melted and it was easier to dig into the ground. The structural framework of the house was made from driftwood that was often split using wedges to create boards with flat surfaces. Driftwood with tree roots at the top would be inverted and placed in the corners of the house pit [4]. These roots would help to support roofing materials, including driftwood beams which were placed flat side down and which ran the length of the structure. The entire roof would then be covered with moss or sod for insulation, giving these structures their most common English name [4]. While sod houses follow a consistent construction method, archaeologists have found that winter houses have changed in size over time with more recent structures being among the largest [5]. The three sleeping platforms contained within such dwellings gave them their distinctive cruciform shape.

This gallery contains images of the excavation of Inuvialuit sod houses. There are also images showing how 3D laser scanning has been used to document the architecture revealed by these excavations. Images of artifacts recovered from within these unique dwellings, as well as a computer reconstruction of how the interior may have appeared to  its inhabitants under lamplight, can also be viewed. 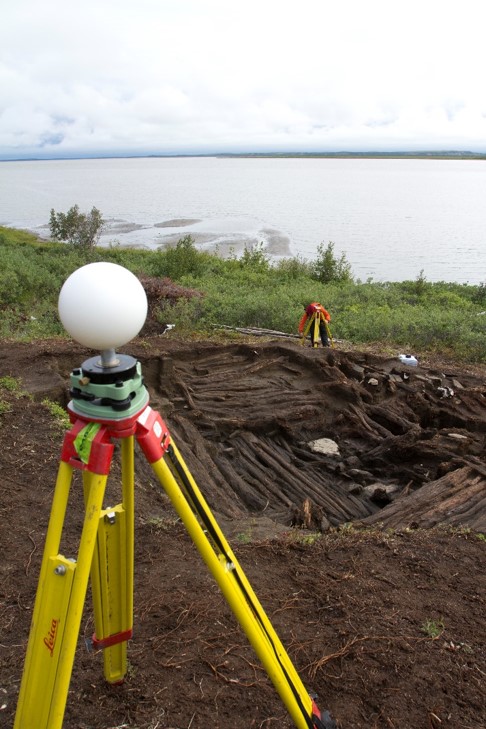 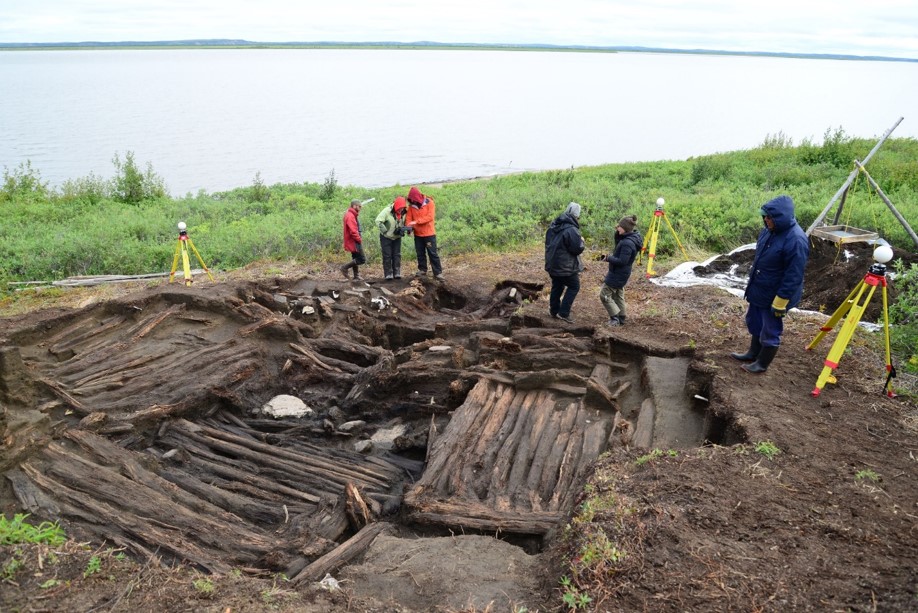 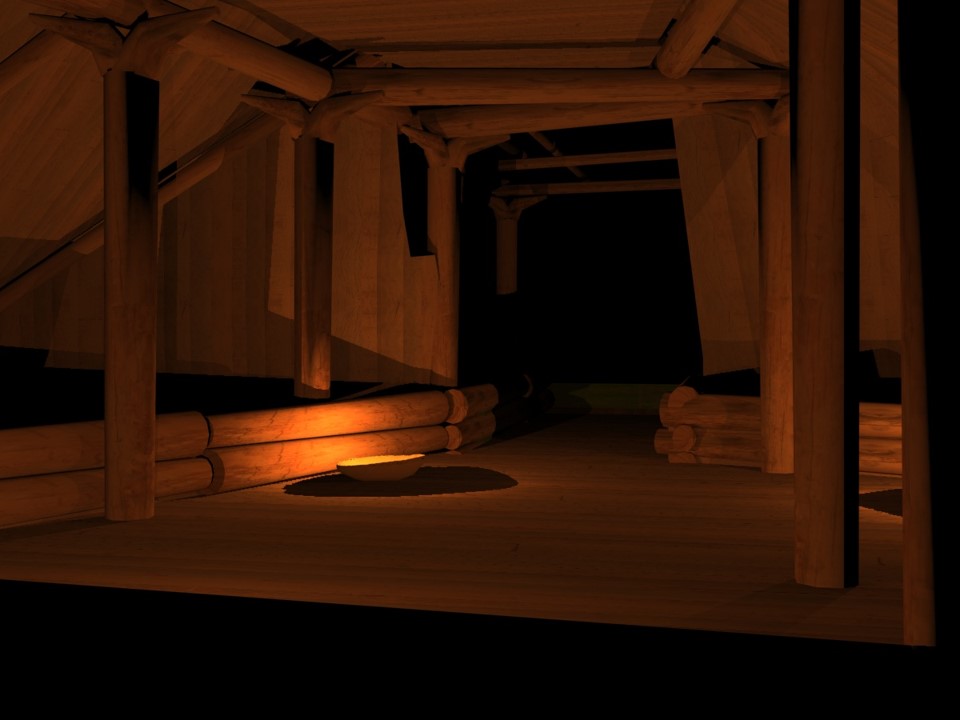 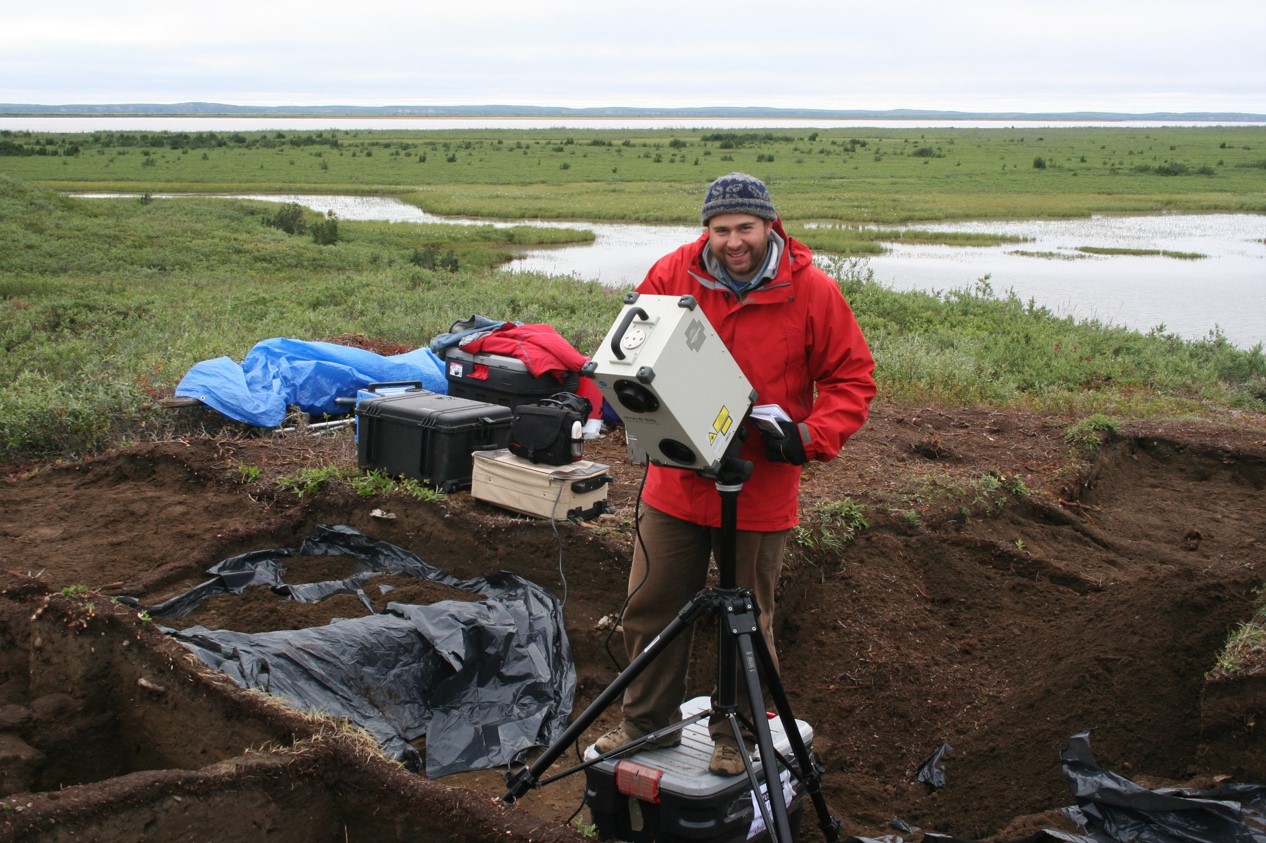 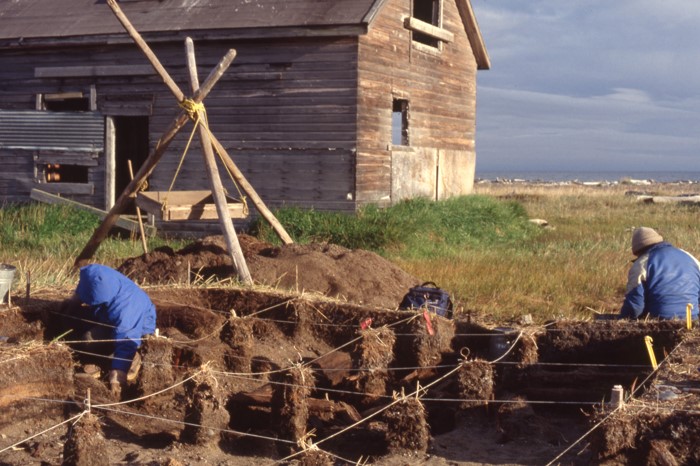 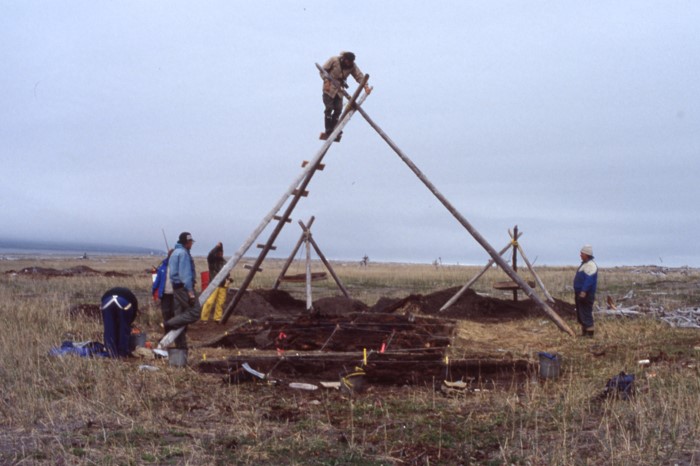 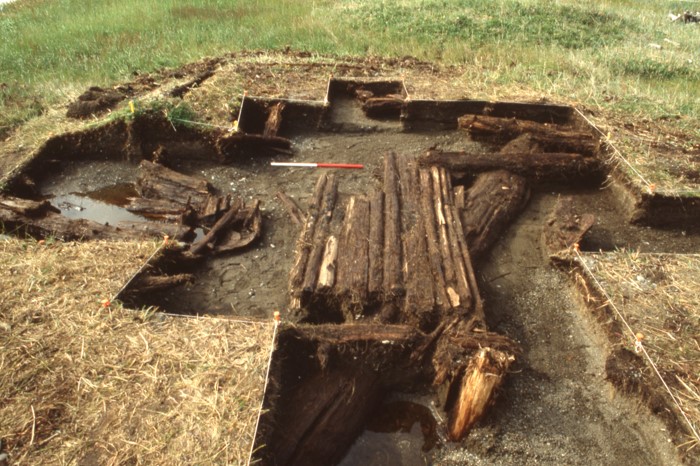 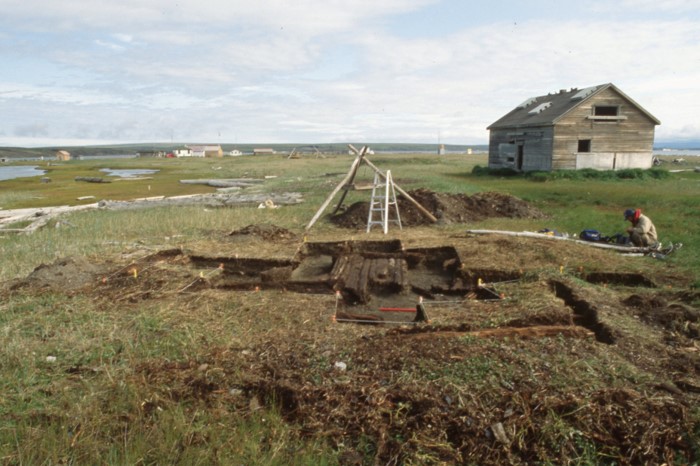 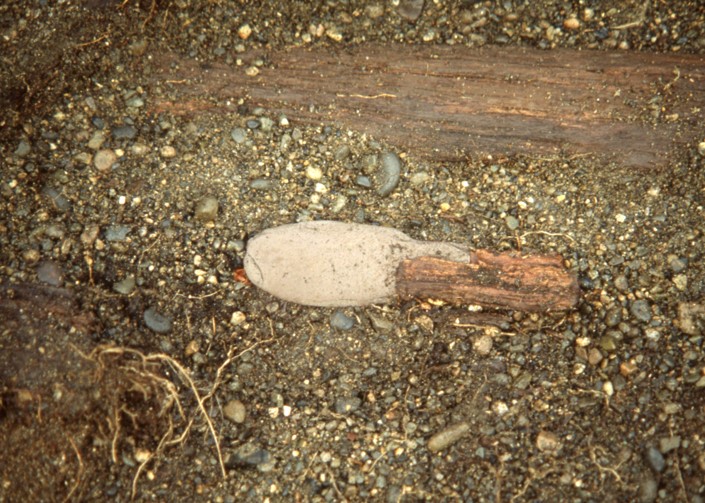 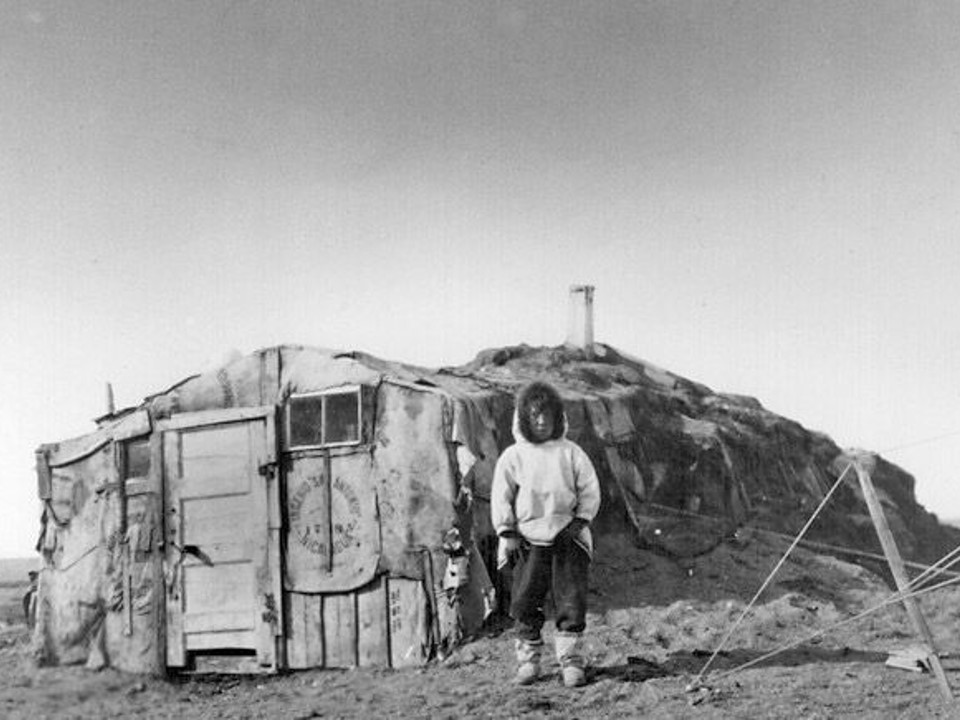 The point cloud of an Inuvialuit sod house on the landing page was captured over two field seasons using a Faro Focus 3D scanner and a Z+F 5010X scanner. The large size of the house meant that it had to be excavated over two field seasons. In between seasons it was covered by tarps and back filled. The feature was scanned at the end of each field season. By comparing the point clouds we can identify and determine any changes to the feature that might have occurred over the course of the excavation. The red dots (2016) and yellow triangles (2015) indicate scanner positions. 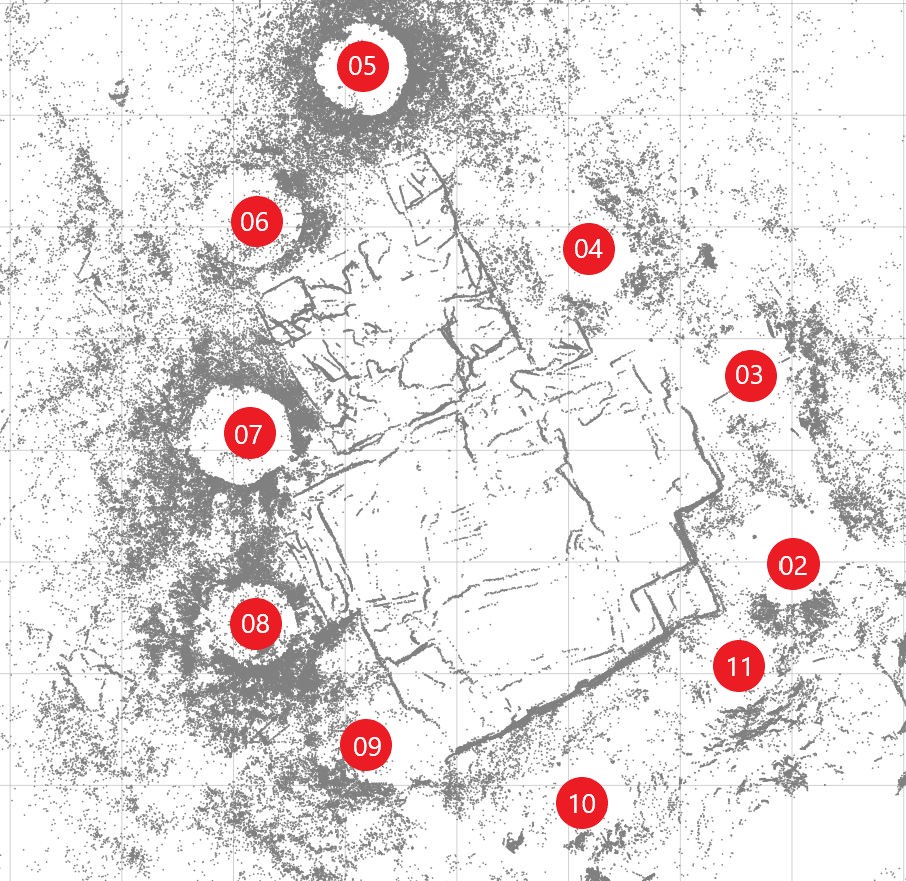